The Weathercock Being the Adventures of a Boy with a Bias 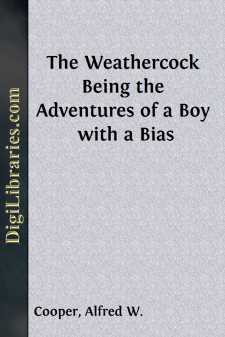 “Do you hear? Which way does the wind blow?”

Three salutations shouted at a lad of about sixteen, who had just shown himself at the edge of a wood on the sunny slope of the Southwolds, one glorious September morning, when the spider-webs were still glittering with iridescent colours, as if every tiny strand were strung with diamonds, emeralds and amethysts, and the thick green moss that clothed the nut stubbs was one glorious sheen of topaz, sapphire and gold. Down in the valley the mist still hung in thick patches, but the sun’s rays were piercing it in many directions, and there was every promise of a hot day, such as would make the shade of the great forest with its acorn-laden oaks welcome, and the whole place tempting to one who cared to fill pocket or basket with the bearded hazelnuts, already beginning to show colour in the pale green husks, while the acorns, too, were changing tint slightly, and growing too big for their cups.

The boy, who stood with his feet deep in moss, was framed by the long lithe hazel stems, and his sun-browned face looked darker in the shade as, bareheaded, his cap being tucked in the band of his Norfolk jacket, he passed one hand through his short curly hair, to remove a dead leaf or two, while the other held a little basket full of something of a bright orange gold; and as he glanced at the three youths in the road, he hurriedly bent down to rub a little loam from the knees of his knickerbockers—loam freshly gathered from some bank in the wood.

“Morning,” he said, as the momentary annoyance caused by the encounter passed off. “How is it you chaps are out so early?”

“Searching after you, of course,” said the first speaker. “What have you got there?”

“These,” said the lad, holding up his basket, as he stepped down amongst the dewy grass at the side of the road. “Have some?”

The first of the three well-dressed youths, all pupils reading with the Reverend Morton Syme, at the Rectory, Mavis Greythorpe, Lincolnshire, gave a sidelong glance at his companions and advanced a step.

The bearer of the basket raised his left hand with his fungoid booty, frankly trusting, and his fellow-pupil delivered a sharp kick at the bottom of the wicker receptacle—a kick intended to send the golden chalice-like fungi flying scattered in the air. But George Vane Lee was as quick in defence as the other was in attack, and his parry was made in the easiest and most effortless way.

It was just this:—

He let the basket swing down and just passed his right hand forward, seeming only to brush the assailant’s ankle—in fact it was the merest touch, but sufficient to upset the equilibrium of a kicker on one leg, and the next moment Lance Distin was lying on his back in a perfect tangle of brambles, out of which he scrambled, scratched and furious, amidst a roar of laughter from his companions....