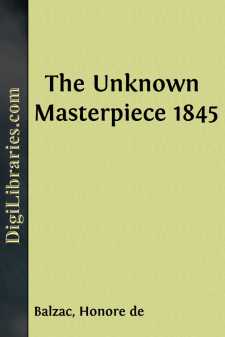 On a cold December morning in the year 1612, a young man, whose clothing was somewhat of the thinnest, was walking to and fro before a gateway in the Rue des Grands-Augustins in Paris. He went up and down the street before this house with the irresolution of a gallant who dares not venture into the presence of the mistress whom he loves for the first time, easy of access though she may be; but after a sufficiently long interval of hesitation, he at last crossed the threshold and inquired of an old woman, who was sweeping out a large room on the ground floor, whether Master Porbus was within. Receiving a reply in the affirmative, the young man went slowly up the staircase, like a gentleman but newly come to court, and doubtful as to his reception by the king. He came to a stand once more on the landing at the head of the stairs, and again he hesitated before raising his hand to the grotesque knocker on the door of the studio, where doubtless the painter was at work—Master Porbus, sometime painter in ordinary to Henri IV till Mary de' Medici took Rubens into favor.

The young man felt deeply stirred by an emotion that must thrill the hearts of all great artists when, in the pride of their youth and their first love of art, they come into the presence of a master or stand before a masterpiece. For all human sentiments there is a time of early blossoming, a day of generous enthusiasm that gradually fades until nothing is left of happiness but a memory, and glory is known for a delusion. Of all these delicate and short-lived emotions, none so resemble love as the passion of a young artist for his art, as he is about to enter on the blissful martyrdom of his career of glory and disaster, of vague expectations and real disappointments.

Those who have missed this experience in the early days of light purses; who have not, in the dawn of their genius, stood in the presence of a master and felt the throbbing of their hearts, will always carry in their inmost souls a chord that has never been touched, and in their work an indefinable quality will be lacking, a something in the stroke of the brush, a mysterious element that we call poetry. The swaggerers, so puffed up by self-conceit that they are confident over-soon of their success, can never be taken for men of talent save by fools. From this point of view, if youthful modesty is the measure of youthful genius, the stranger on the staircase might be allowed to have something in him; for he seemed to possess the indescribable diffidence, the early timidity that artists are bound to lose in the course of a great career, even as pretty women lose it as they make progress in the arts of coquetry. Self-distrust vanishes as triumph succeeds to triumph, and modesty is, perhaps, distrust of itself.

The poor neophyte was so overcome by the consciousness of his own presumption and insignificance, that it began to look as if he was hardly likely to penetrate into the studio of the painter, to whom we owe the wonderful portrait of Henri IV....