The Unicorn from the Stars and Other Plays 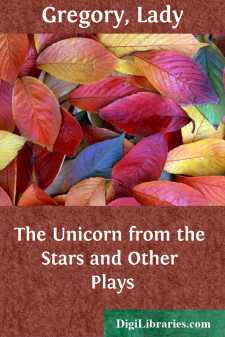 About seven years ago I began to dictate the first of these Plays to Lady Gregory. My eyesight had become so bad that I feared I could henceforth write nothing with my own hands but verses, which, as Theophile Gautier has said, can be written with a burnt match. Our Irish Dramatic movement was just passing out of the hands of English Actors, hired because we knew of no Irish ones, and our little troop of Irish amateurs—as they were at the time—could not have too many Plays, for they would come to nothing without continued playing. Besides, it was exciting to discover, after the unpopularity of blank verse, what one could do with three Plays written in prose and founded on three public interests deliberately chosen,—religion, humour, patriotism. I planned in those days to establish a dramatic movement upon the popular passions, as the ritual of religion is established in the emotions that surround birth and death and marriage, and it was only the coming of the unclassifiable, uncontrollable, capricious, uncompromising genius of J. M. Synge that altered the direction of the movement and made it individual, critical, and combative. If his had not, some other stone would have blocked up the old way, for the public mind of Ireland, stupefied by prolonged intolerant organisation, can take but brief pleasure in the caprice that is in all art, whatever its subject, and, more commonly, can but hate unaccustomed personal reverie.

I had dreamed the subject of "Cathleen ni Houlihan," but found when I looked for words that I could not create peasant dialogue that would go nearer to peasant life than the dialogue in "The Land of Heart's Desire" or "The Countess Cathleen." Every artistic form has its own ancestry, and the more elaborate it is, the more is the writer constrained to symbolise rather than to represent life, until perhaps his ladies of fashion are shepherds and shepherdesses, as when Colin Clout came home again. I could not get away, no matter how closely I watched the country life, from images and dreams which had all too royal blood, for they were descended like the thought of every poet from all the conquering dreams of Europe, and I wished to make that high life mix into some rough contemporary life without ceasing to be itself, as so many old books and Plays have mixed it and so few modern, and to do this I added another knowledge to my own. Lady Gregory had written no Plays, but had, I discovered, a greater knowledge of the country mind and country speech than anybody I had ever met with, and nothing but a burden of knowledge could keep "Cathleen ni Houlihan" from the clouds. I needed less help for the "Hour-Glass," for the speech there is far from reality, and so the Play is almost wholly mine. When, however, I brought to her the general scheme for the "Pot of Broth," a little farce which seems rather imitative to-day, though it plays well enough, and of the first version of "The Unicorn," "Where there is Nothing," a five-act Play written in a fortnight to save it from a plagiarist, and tried to dictate them, her share grew more and more considerable....