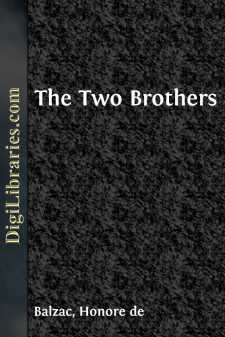 In 1792 the townspeople of Issoudun enjoyed the services of a physician named Rouget, whom they held to be a man of consummate malignity. Were we to believe certain bold tongues, he made his wife extremely unhappy, although she was the most beautiful woman of the neighborhood. Perhaps, indeed, she was rather silly. But the prying of friends, the slander of enemies, and the gossip of acquaintances, had never succeeded in laying bare the interior of that household. Doctor Rouget was a man of whom we say in common parlance, "He is not pleasant to deal with." Consequently, during his lifetime, his townsmen kept silence about him and treated him civilly. His wife, a demoiselle Descoings, feeble in health during her girlhood (which was said to be a reason why the doctor married her), gave birth to a son, and also to a daughter who arrived, unexpectedly, ten years after her brother, and whose birth took the husband, doctor though he were, by surprise. This late-comer was named Agathe.

These little facts are so simple, so commonplace, that a writer seems scarcely justified in placing them in the fore-front of his history; yet if they are not known, a man of Doctor Rouget's stamp would be thought a monster, an unnatural father, when, in point of fact, he was only following out the evil tendencies which many people shelter under the terrible axiom that "men should have strength of character,"—a masculine phrase that has caused many a woman's misery.

The Descoings, father-in-law and mother-in-law of the doctor, were commission merchants in the wool-trade, and did a double business by selling for the producers and buying for the manufacturers of the golden fleeces of Berry; thus pocketing a commission on both sides. In this way they grew rich and miserly—the outcome of many such lives. Descoings the son, younger brother of Madame Rouget, did not like Issoudun. He went to seek his fortune in Paris, where he set up as a grocer in the rue Saint-Honore. That step led to his ruin. But nothing could have hindered it: a grocer is drawn to his business by an attracting force quite equal to the repelling force which drives artists away from it. We do not sufficiently study the social potentialities which make up the various vocations of life. It would be interesting to know what determines one man to be a stationer rather than a baker; since, in our day, sons are not compelled to follow the calling of their fathers, as they were among the Egyptians. In this instance, love decided the vocation of Descoings. He said to himself, "I, too, will be a grocer!" and in the same breath he said (also to himself) some other things regarding his employer,—a beautiful creature, with whom he had fallen desperately in love. Without other help than patience and the trifling sum of money his father and mother sent him, he married the widow of his predecessor, Monsieur Bixiou.

In 1792 Descoings was thought to be doing an excellent business. At that time, the old Descoings were still living....