The Trembling of the Veil 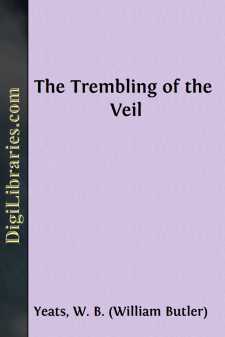 At the end of the ’eighties my father and mother, my brother and sisters and myself, all newly arrived from Dublin, were settled in Bedford Park in a red-brick house with several mantelpieces of wood, copied from marble mantelpieces designed by the brothers Adam, a balcony and a little garden shadowed by a great horse-chestnut tree. Years before we had lived there, when the crooked ostentatiously picturesque streets with great trees casting great shadows had been a new enthusiasm: the Pre-Raphaelite movement at last affecting life. But now exaggerated criticism had taken the place of enthusiasm, the tiled roofs, the first in modern London, were said to leak, which they did not, and the drains to be bad, though that was no longer true; and I imagine that houses were cheap. I remember feeling disappointed because the co-operative stores, with their little seventeenth century panes, had lost the romance they had when I had passed them still unfinished on my way to school; and because the public house, called The Tabard after Chaucer’s Inn, was so plainly a common public house; and because the great sign of a trumpeter designed by Rooke, the Pre-Raphaelite artist, had been freshened by some inferior hand. The big red-brick church had never pleased me, and I was accustomed, when I saw the wooden balustrade that ran along the slanting edge of the roof where nobody ever walked or could walk, to remember the opinion of some architect friend of my father’s, that it had been put there to keep the birds from falling off. Still, however, it had some village characters and helped us to feel not wholly lost in the metropolis. I no longer went to church as a regular habit, but go I sometimes did, for one Sunday morning I saw these words painted on a board in the porch: “The congregation are requested to kneel during prayers; the kneelers are afterwards to be hung upon pegs provided for the purpose.” In front of every seat hung a little cushion and these cushions were called “kneelers.” Presently the joke ran through the community, where there were many artists who considered religion at best an unimportant accessory to good architecture and who disliked that particular church.

I could not understand where the charm had gone that I had felt, when as a school-boy of twelve or thirteen I had played among the unfinished houses, once leaving the marks of my two hands, blacked by a fall among some paint, upon a white balustrade. Sometimes I thought it was because these were real houses, while my play had been among toy-houses some day to be inhabited by imaginary people full of the happiness that one can see in picture books.

I was in all things Pre-Raphaelite. When I was fifteen or sixteen my father had told me about Rossetti and Blake and given me their poetry to read; and once at Liverpool on my way to Sligo I had seen Dante’s Dream in the gallery there, a picture painted when Rossetti had lost his dramatic power and to-day not very pleasing to me, and its colour, its people, its romantic architecture had blotted all other pictures away. It was a perpetual bewilderment that my father, who had begun life as a Pre-Raphaelite painter, now painted portraits of the first comer, children selling newspapers, or a consumptive girl with a basket of fish upon her head, and that when, moved perhaps by some memory of his youth, he chose some theme from poetic tradition, he would soon weary and leave it unfinished. I had seen the change coming bit by bit and its defence elaborated by young men fresh from the Paris art-schools. “We must paint what is in front of us,” or “A man must be of his own time,” they would say, and if I spoke of Blake or Rossetti they would point out his bad drawing and tell me to admire Carolus Duran and Bastien-Lepage. Then, too, they were very ignorant men; they read nothing, for nothing mattered but “knowing how to paint,” being in reaction against a generation that seemed to have wasted its time upon so many things. I thought myself alone in hating these young men, now indeed getting towards middle life, their contempt for the past, their monopoly of the future, but in a few months I was to discover others of my own age, who thought as I did, for it is not true that youth looks before it with the mechanical gaze of a well-drilled soldier. Its quarrel is not with the past, but with the present, where its elders are so obviously powerful and no cause seems lost if it seem to threaten that power. Does cultivated youth ever really love the future, where the eye can discover no persecuted Royalty hidden among oak leaves, though from it certainly does come so much proletarian rhetoric?

I was unlike others of my generation in one thing only. I am very religious, and deprived by Huxley and Tyndall, whom I detested, of the simple-minded religion of my childhood, I had made a new religion, almost an infallible church out of poetic tradition: a fardel of stories, and of personages, and of emotions, inseparable from their first expression, passed on from generation to generation by poets and painters with some help from philosophers and theologians. I wished for a world, where I could discover this tradition perpetually, and not in pictures and in poems only, but in tiles round the chimney-piece and in the hangings that kept out the draught....