The Roll-Call Of The Reef 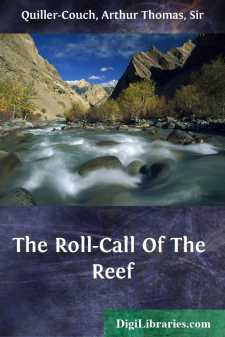 "Yes, sir," said my host, the quarryman, reaching down the relics from their hook in the wall over the chimneypiece; "they've hung here all my time, and most of my father's. The women won't touch 'em; they're afraid of the story. So here they'll dangle, and gather dust and smoke, till another tenant comes and tosses 'em out o' doors for rubbish. Whew! 'tis coarse weather, surely."

He went to the door, opened it, and stood studying the gale that beat upon his cottage-front, straight from the Manacle Reef. The rain drove past him into the kitchen, aslant like threads of gold silk in the shine of the wreck-wood fire. Meanwhile, by the same firelight, I examined the relics on my knee. The metal of each was tarnished out of knowledge. But the trumpet was evidently an old cavalry trumpet, and the threads of its party-colored sling, though fretted and dusty, still hung together. Around the side-drum, beneath its cracked brown varnish. I could hardly trace a royal coat-of-arms and a legend running, "Per Mare Per Terrain"—the motto of the marines. Its parchment, though black and scented with wood-smoke, was limp and mildewed; and I began to tighten up the straps—under which the drumsticks had been loosely thrust—with the idle purpose of trying if some music might be got out of the old drum yet.

But as I turned it on my knee, I found the drum attached to the trumpet-sling by a curious barrel-shaped padlock, and paused to examine this. The body of the lock was composed of half a dozen brass rings, set accurately edge to edge; and, rubbing the brass with my thumb, I saw that each of the six had a series of letters engraved around it.

I knew the trick of it, I thought. Here was one of those word padlocks, once so common; only to be opened by getting the rings to spell a certain word, which the dealer confides to you.

My host shut and barred the door, and came back to the hearth.

"'Twas just such a wind—east by south—that brought in what you've got between your hands. Back in the year 'nine, it was; my father has told me the tale a score o' times. You're twisting round the rings, I see. But you'll never guess the word. Parson Kendall, he made the word, and he locked down a couple o' ghosts in their graves with it; and when his time came he went to his own grave and took the word with him."

"You want the story, I see, sir. My father could tell it better than I can. He was a young man in the year 'nine, unmarried at the time, and living in this very cottage, just as I be. That's how he came to get mixed up with the tale."

He took a chair, lighted a short pipe, and went on, with his eyes fixed on the dancing violet flames:

"Yes, he'd ha' been about thirty year old in January, eighteen 'nine. The storm got up in the night o' the twenty-first o' that month. My father was dressed and out long before daylight; he never was one to bide in bed, let be that the gale by this time was pretty near lifting the thatch over his head. Besides which, he'd fenced a small 'taty-patch that winter, down by Lowland Point, and he wanted to see if it stood the night's work. He took the path across Gunner's Meadow—where they buried most of the bodies afterward. The wind was right in his teeth at the time, and once on the way (he's told me this often) a great strip of oarweed came flying through the darkness and fetched him a slap on the cheek like a cold hand....