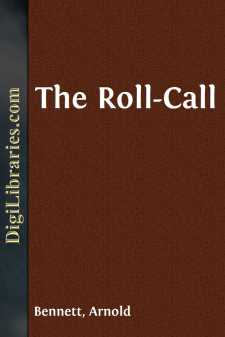 CHAPTER I THE NEW LODGING I

In the pupils' room of the offices of Lucas & Enwright, architects, Russell Square, Bloomsbury, George Edwin Cannon, an articled pupil, leaned over a large drawing-board and looked up at Mr. Enwright, the head of the firm, who with cigarette and stick was on his way out after what he called a good day's work. It was past six o'clock on an evening in early July 1901. To George's right was an open door leading to the principals' room, and to his left another open door leading to more rooms and to the staircase. The lofty chambers were full of lassitude; but round about George, who was working late, there floated the tonic vapour of conscious virtue. Haim, the factotum, could be seen and heard moving in his cubicle which guarded the offices from the stairs. In the rooms shortly to be deserted and locked up, and in the decline of the day, the three men were drawn together like survivors.

"I gather you're going to change your abode," said Mr. Enwright, having stopped.

"Did Mr. Orgreave tell you, then?" George asked.

John Orgreave was Mr. Enwright's junior partner; and for nearly two years, since his advent in London from the Five Towns, George had lived with Mr. and Mrs. Orgreave at Bedford Park. The Orgreaves, too, sprang from the Five Towns. John's people and George's people were closely entwined in the local annals.

Pupil and principal glanced discreetly at one another, ex changing in silence vague, malicious, unutterable critical verdicts upon both John Orgreave and his wife.

"Where are you going to?"

"Haven't settled a bit," said George. "I wish I could live in Paris."

"Paris wouldn't be much good to you yet," Mr. Enwright laughed benevolently.

"I suppose it wouldn't. Besides, of course——"

George spoke in a tone of candid deferential acceptance, which flattered Mr. Enwright very much, for it was the final proof of the prestige which the grizzled and wrinkled and peculiar Fellow and Member of the Council of the Royal Institute of British Architects had acquired in the estimation of that extremely independent, tossing sprig, George Edwin Cannon. Mr. Enwright had recently been paying a visit to Paris, and George had been sitting for the Intermediate Examination. "You can join me here for a few days after the exam., if you care to," Mr. Enwright had sent over. It was George's introduction to the Continent, and the circumstances of it were almost ideal. For a week the deeply experienced connoisseur of all the arts had had the fine, eager, responsive virgin mind hi his power. Day after day he had watched and guided it amid entirely new sensations. Never had Mr. Enwright enjoyed himself more purely, and at the close he knew with satisfaction that he had put Paris in a proper perspective for George, and perhaps saved the youth from years of groping misapprehension. As for George, all his preconceived notions about Paris had been destroyed or shaken. In the quadrangles of the Louvre, for example, Mr....