The Rise of Iskander 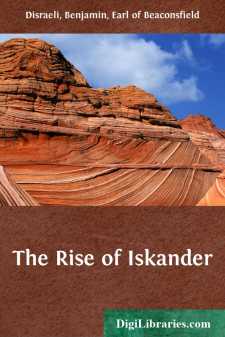 The sun had set behind the mountains, and the rich plain of Athens was suffused with the violet glow of a Grecian eye. A light breeze rose; the olive-groves awoke from their noonday trance, and rustled with returning animation, and the pennons of the Turkish squadron, that lay at anchor in the harbour of Piræus, twinkled in the lively air. From one gate of the city the women came forth in procession to the fountain; from another, a band of sumptuous horsemen sallied out, and threw their wanton javelins in the invigorating sky, as they galloped over the plain. The voice of birds, the buzz of beauteous insects, the breath of fragrant flowers, the quivering note of the nightingale, the pattering call of the grasshopper, and the perfume of the violet, shrinking from the embrace of the twilight breeze, filled the purple air with music and with odour.

A solitary being stood upon the towering crag of the Acropolis, amid the ruins of the Temple of Minerva, and gazed upon the inspiring scene. Around him rose the matchless memorials of antique art; immortal columns whose symmetry baffles modern proportion, serene Caryatides, bearing with greater grace a graceful burthen, carvings of delicate precision, and friezes breathing with heroic life. Apparently the stranger, though habited as a Moslemin, was not insensible to the genius of the locality, nor indeed would his form and countenance have misbecome a contemporary of Pericles and Phidias. In the prime of life and far above the common stature, but with a frame the muscular power of which was even exceeded by its almost ideal symmetry, white forehead, his straight profile, his oval countenance, and his curling lip, exhibited the same visage that had inspired the sculptor of the surrounding demigods.

The dress of the stranger, although gorgeous, was, however, certainly not classic. A crimson shawl was wound round his head and glittered with a trembling aigrette of diamonds. His vest which set tight to his form, was of green velvet, richly embroidered with gold and pearls. Over this he wore a very light jacket of crimson velvet, equally embroidered, and lined with sable. He wore also the full white camese common among the Albanians; and while his feet were protected by sandals, the lower part of his legs was guarded by greaves of embroidered green velvet. From a broad belt of scarlet leather peeped forth the jewelled hilts of a variety of daggers, and by his side was an enormous scimitar, in a scabbard of chased silver.

The stranger gazed upon the wide prospect before him with an air of pensive abstraction. "Beautiful Greece," he exclaimed, "thou art still my country. A mournful lot is mine, a strange and mournful lot, yet not uncheered by hope. I am at least a warrior; and this arm, though trained to war against thee, will not well forget, in the quick hour of battle, the blood that flows within it. Themistocles saved Greece and died a Satrap: I am bred one, let me reverse our lots, and die at least a patriot."

At this moment the Evening Hymn to the Virgin arose from a neighbouring convent....