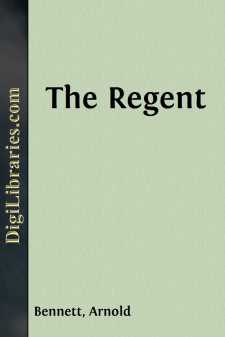 CHAPTER I DOG-BITE I

"And yet," Edward Henry Machin reflected as at six minutes to six he approached his own dwelling at the top of Bleakridge, "and yet—I don't feel so jolly after all!"

The first two words of this disturbing meditation had reference to the fact that, by telephoning twice to his stockbrokers at Manchester, he had just made the sum of three hundred and forty-one pounds in a purely speculative transaction concerning Rubber Shares. (It was in the autumn of the great gambling year, 1910.) He had simply opened his lucky and wise mouth at the proper moment, and the money, like ripe, golden fruit, had fallen into it, a gift from benign heaven, surely a cause for happiness! And yet—he did not feel so jolly! He was surprised, he was even a little hurt, to discover by introspection that monetary gain was not necessarily accompanied by felicity. Nevertheless, this very successful man of the world of the Five Towns, having been born on the 27th of May 1867, had reached the age of forty-three and a half years!

"I must be getting older," he reflected.

As he disappeared within the reddish garden wall which sheltered his abode from the publicity of Trafalgar Road, he half hoped to see Nellie waiting for him on the famous marble step of the porch, for the woman had long, long since invented a way of scouting for his advent from the small window in the bathroom. But there was nobody on the marble step. His melancholy increased. At the mid-day meal he had complained of neuralgia, and hence this was an evening upon which he might fairly have expected to see sympathy charmingly attired in the porch. It is true that the neuralgia had completely gone. "Still," he said to himself with justifiable sardonic gloom, "how does she know my neuralgia's gone? She doesn't know."

Having opened the front-door (with the thinnest, neatest latch-key in the Five Towns), he entered his home and stumbled slightly over a brush that was lying against the sunk door-mat. He gazed at that brush with resentment. It was a dilapidated hand-brush. The offensive object would have been out of place, at nightfall, in the lobby of any house. But in the lobby of his house—the house which he had planned a dozen years earlier, to the special end of minimizing domestic labour, and which he had always kept up to date with the latest devices—in his lobby the spectacle of a vile, outworn hand-brush at tea-time amounted to a scandal. Less than a fortnight previously he had purchased and presented to his wife a marvellous electric vacuum-cleaner, surpassing [2] all former vacuum-cleaners. You simply attached this machine by a cord to the wall, like a dog, and waved it in mysterious passes over the floor, like a fan, and the house was clean!...