The Red Book of Heroes 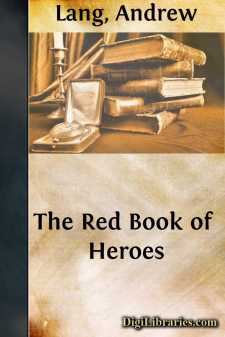 Add to My Favorites
Published: 9 years ago
Downloads: 120
Rating: (0 Votes)

'Life is not all beer and skittles,' said a reflective sportsman, and all books are not fairy tales. In an imperfect state of existence, 'the peety of it is that we cannot have all things as we would like them.' Undeniably we would like all books to be fairy tales or novels, and at present most of them are. But there is another side to things, and we must face it. '"Life is real, life is earnest," as Tennyson tells us,' said an orator to whom I listened lately, and though Longfellow, not Tennyson, wrote the famous line quoted by the earnest speaker, yet there is a good deal of truth in it. The word 'earnest,' like many other good words, has been overdone. It is common to sneer at 'earnest workers,' yet where would we be without them, especially in our climate?

In a Polynesian island, where the skies for ever smile, and the blacks for ever dance, earnestness is superfluous. The bread-fruit tree delivers its rolls punctually every morning, strawberries or other fruits, as nice, spring beneath the feet of the dancers; the cavern in the forest provides a roof and shelter from the sun; the sea supplies a swimming-bath, and man, in time of peace, has only to enjoy himself, eat and drink, laugh and love, sing songs and tell fairy tales. His drapery is woven of fragrant flowers, nobody is poor and anxious about food, nobody is rich and afraid of losing his money, nobody needs to think of helping others; he has only to put forth his hand, or draw his bow or swing his fishing-rod, and help himself. To be sure, in time of war, man has just got to be earnest, and think out plans for catching and spearing his enemies, and drill his troops and improve his weapons, in fact to do some work, or have his throat cut, and be put in the oven and eaten. Thus it is really hard for the most fortunate people to avoid being earnest now and then.

The people whose stories are told in this book were very different from each other in many ways. The child abbess, Mère Angélique, ruling her convent, and at war with naughty abbesses who hated being earnest, does not at once remind us of Hannibal. The great Montrose, with his poems and his scented love-locks, his devotion to his cause, his chivalry, his death, to which he went gaily clad like a bridegroom to meet his bride, does not seem a companion for Palissy the Potter, all black and shrunk and wrinkled, and bowed over his furnaces. It is a long way from gentle Miss Nightingale, tending wounded dogs when a child, and wounded soldiers when a woman, to Charles Gordon playing wild tricks at school, leading a Chinese army, watching alone at Khartoum, in a circle of cruel foes, for the sight of the British colours, and the sounds of the bagpipes that never met his eyes and ears.

But these people, and all the others whose stories are told, had this in common, that they were in earnest, though we may be sure that they did not go about with talk of earnestness for ever in their mouths. It came natural to them, they could not help it, they liked it, their hearts were set on two things: to do their very best, and to keep their honour. The Constant Prince suffered hunger and cold and long imprisonment all 'to keep the bird in his bosom,' as the old Cavalier said, to be true to honour. 'I will carry with me honour and fidelity to the grave,' said Montrose; and he kept his word, though his enemies gave him no grave, but placed his head and limbs on spikes in various towns of his country. But now his grave, in St. Giles's Church in Edinburgh, is the most beautiful and honourable in Scotland, adorned with his stainless scutcheon, and with those of Napiers and Grahams, his kindred and his friends.