The Prince and the Pauper, Part 4. 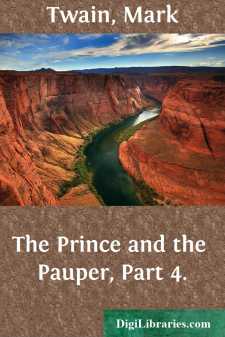 Chapter XII. The Prince and his deliverer.

As soon as Miles Hendon and the little prince were clear of the mob, they struck down through back lanes and alleys toward the river.  Their way was unobstructed until they approached London Bridge; then they ploughed into the multitude again, Hendon keeping a fast grip upon the Prince's—no, the King's—wrist.  The tremendous news was already abroad, and the boy learned it from a thousand voices at once—"The King is dead!"  The tidings struck a chill to the heart of the poor little waif, and sent a shudder through his frame.  He realised the greatness of his loss, and was filled with a bitter grief; for the grim tyrant who had been such a terror to others had always been gentle with him.  The tears sprang to his eyes and blurred all objects.  For an instant he felt himself the most forlorn, outcast, and forsaken of God's creatures—then another cry shook the night with its far-reaching thunders:  "Long live King Edward the Sixth!" and this made his eyes kindle, and thrilled him with pride to his fingers' ends. "Ah," he thought, "how grand and strange it seems—I AM KING!"

Our friends threaded their way slowly through the throngs upon the bridge.  This structure, which had stood for six hundred years, and had been a noisy and populous thoroughfare all that time, was a curious affair, for a closely packed rank of stores and shops, with family quarters overhead, stretched along both sides of it, from one bank of the river to the other.  The Bridge was a sort of town to itself; it had its inn, its beer-houses, its bakeries, its haberdasheries, its food markets, its manufacturing industries, and even its church.  It looked upon the two neighbours which it linked together—London and Southwark—as being well enough as suburbs, but not otherwise particularly important.  It was a close corporation, so to speak; it was a narrow town, of a single street a fifth of a mile long, its population was but a village population and everybody in it knew all his fellow-townsmen intimately, and had known their fathers and mothers before them—and all their little family affairs into the bargain.  It had its aristocracy, of course—its fine old families of butchers, and bakers, and what-not, who had occupied the same old premises for five or six hundred years, and knew the great history of the Bridge from beginning to end, and all its strange legends; and who always talked bridgy talk, and thought bridgy thoughts, and lied in a long, level, direct, substantial bridgy way.  It was just the sort of population to be narrow and ignorant and self-conceited. Children were born on the Bridge, were reared there, grew to old age, and finally died without ever having set a foot upon any part of the world but London Bridge alone.  Such people would naturally imagine that the mighty and interminable procession which moved through its street night and day, with its confused roar of shouts and cries, its neighings and bellowing and bleatings and its muffled thunder-tramp, was the one great thing in this world, and themselves somehow the proprietors of it....