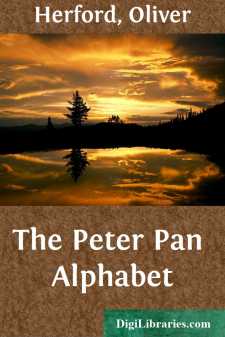 A is for Adams

So A is for Adams, Oh! fortunate ALuck certainly seems to be coming your way. In the Days of my Infancy, A I recallStood for Ant or for Apple or anything small. Now A stands for Adams, Maude Adams, Hurray!I always said A would be Famous some day.

B stands for the Boys

B’s for the Boys, all as Busy as BeesThey are building a Little House under the TreesWith funny red walls and mossy green roofWhere Wendy may live from danger aloof.

C is the Crocodile

C is the Crocodile Creepy who ateThe right hand of Hook and covets its mateHe makes a loud ticking wherever he goesFor he swallowed a Clock (To kill time I suppose).

D is the Dire and Dread DoodleDooWith which Peter Daunted the Pirate crew,And demolished a foolish old Proverb for goodBy crowing before he was out of the wood.

E is the Exit

E is the Exit the three children madeWith Peter and Tinker for guides, Who’s afraid?They sailed through the window as calm as could beLike three little Cherubim out for a Spree.

F is the Fight

F is the Fight, Peter Fought unafraidAnd F is his Falchion (Poetic for Blade)And F’s the Fine Feeling all Fearless Boys FeelWhen they give a Fierce Pirate a taste of Cold Steel.

G is Old Glory—that Peter upreared,When Hook in the Crocodile’s smile disappeared,And the Decks were still wet with the terrible stainsOf Invisible Gore from the Pirate’s veins.

I’m sorry for H, tho’ I don’t call Hook meanFor wanting to Blow Up his own Magazine.I’ve known a Good Author blow up, in a Huff,A Magazine just for not printing his Stuff.

I’s for the Indian Girl

Peter Pan was too coy for the Indian Miss;She sighed for his scalp—all she got was a kiss.

J is for John

J is for John (No, he hasn’t a Pain;He is Red-Handed Jack of the Pirate Main).

K stands for a Kiss

K stands for a Kiss? Oh, stern featured K!Who would have suspected—You’d leanings that way!Peter called his a Thimble—(I think it sounds tameTo call Kisses Thimbles—but what’s in a Name!)

L is the Lion

L is the Lion who lashed his Fierce Tail,And did Peter Tremble? did Peter turn Pale?Not Much! ’Twas the Lion who moved to adjourn,He couldn’t turn Tail, Peter left none to Turn.

M is for Michael

N is for Napoleon and Nana

N is Napoleon—Mystic—ProfoundAnd N is for Nana the Noble Nurse Hound—Two wonderful natures—each great in his way,One’s dead and the other is “Having his Day.”

O’s for Odds-fish—the Pirate’s Oath.To print such a word, Gentle Reader, I’m loth.And should You be guilty of language so low,I should have to stop calling you “Gentle,” you know.

P is for Peter

P is for Peter, and so are we all,May he ever keep young and his Shadow stay Small.Yet I think ’tis a pity the White House is Bann’d....