The People of the Mist 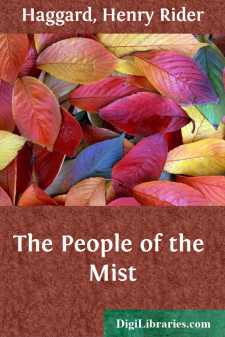 The January afternoon was passing into night, the air was cold and still, so still that not a single twig of the naked beech-trees stirred; on the grass of the meadows lay a thin white rime, half frost, half snow; the firs stood out blackly against a steel-hued sky, and over the tallest of them hung a single star. Past these bordering firs there ran a road, on which, in this evening of the opening of our story, a young man stood irresolute, glancing now to the right and now to the left.

To his right were two stately gates of iron fantastically wrought, supported by stone pillars on whose summits stood griffins of black marble embracing coats of arms, and banners inscribed with the device Per ardua ad astra. Beyond these gates ran a broad carriage drive, lined on either side by a double row of such oaks as England alone can produce under the most favourable circumstances of soil, aided by the nurturing hand of man and three or four centuries of time.

At the head of this avenue, perhaps half a mile from the roadway, although it looked nearer because of the eminence upon which it was placed, stood a mansion of the class that in auctioneers' advertisements is usually described as "noble." Its general appearance was Elizabethan, for in those days some forgotten Outram had practically rebuilt it; but a large part of its fabric was far more ancient than the Tudors, dating back, so said tradition, to the time of King John. As we are not auctioneers, however, it will be unnecessary to specify its many beauties; indeed, at this date, some of the tribe had recently employed their gift of language on these attractions with copious fulness and accuracy of detail, since Outram Hall, for the first time during six centuries, was, or had been, for sale.

Suffice it to say that, like the oaks of its avenue, Outram was such a house as can only be found in England; no mere mass of bricks and mortar, but a thing that seemed to have acquired a life and individuality of its own. Or, if this saying be too far-fetched and poetical, at the least this venerable home bore some stamp and trace of the lives and individualities of many generations of mankind, linked together in thought and feeling by the common bond of blood.

The young man who stood in the roadway looked long and earnestly towards the mass of buildings that frowned upon him from the crest of the hill, and as he looked an expression came into his face which fell little, if at all, short of that of agony, the agony which the young can feel at the shock of an utter and irredeemable loss. The face that wore such evidence of trouble was a handsome one enough, though just now all the charm of youth seemed to have faded from it. It was dark and strong, nor was it difficult to guess that in after-life it might become stern. The form also was shapely and athletic, though not very tall, giving promise of more than common strength, and the bearing that of a gentleman who had not brought himself up to the belief that ancient blood can cover modern deficiencies of mind and manner....