The Path of the Law 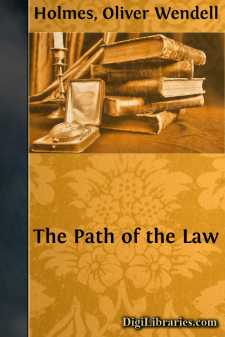 When we study law we are not studying a mystery but a well-known profession. We are studying what we shall want in order to appear before judges, or to advise people in such a way as to keep them out of court. The reason why it is a profession, why people will pay lawyers to argue for them or to advise them, is that in societies like ours the command of the public force is intrusted to the judges in certain cases, and the whole power of the state will be put forth, if necessary, to carry out their judgments and decrees. People want to know under what circumstances and how far they will run the risk of coming against what is so much stronger than themselves, and hence it becomes a business to find out when this danger is to be feared. The object of our study, then, is prediction, the prediction of the incidence of the public force through the instrumentality of the courts.

The means of the study are a body of reports, of treatises, and of statutes, in this country and in England, extending back for six hundred years, and now increasing annually by hundreds. In these sibylline leaves are gathered the scattered prophecies of the past upon the cases in which the axe will fall. These are what properly have been called the oracles of the law. Far the most important and pretty nearly the whole meaning of every new effort of legal thought is to make these prophecies more precise, and to generalize them into a thoroughly connected system. The process is one, from a lawyer's statement of a case, eliminating as it does all the dramatic elements with which his client's story has clothed it, and retaining only the facts of legal import, up to the final analyses and abstract universals of theoretic jurisprudence. The reason why a lawyer does not mention that his client wore a white hat when he made a contract, while Mrs. Quickly would be sure to dwell upon it along with the parcel gilt goblet and the sea-coal fire, is that he foresees that the public force will act in the same way whatever his client had upon his head. It is to make the prophecies easier to be remembered and to be understood that the teachings of the decisions of the past are put into general propositions and gathered into textbooks, or that statutes are passed in a general form. The primary rights and duties with which jurisprudence busies itself again are nothing but prophecies. One of the many evil effects of the confusion between legal and moral ideas, about which I shall have something to say in a moment, is that theory is apt to get the cart before the horse, and consider the right or the duty as something existing apart from and independent of the consequences of its breach, to which certain sanctions are added afterward. But, as I shall try to show, a legal duty so called is nothing but a prediction that if a man does or omits certain things he will be made to suffer in this or that way by judgment of the court; and so of a legal right.

The number of our predictions when generalized and reduced to a system is not unmanageably large....