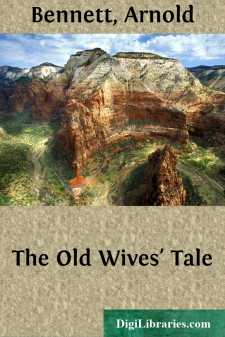 In the autumn of 1903 I used to dine frequently in a restaurant in the Rue de Clichy, Paris. Here were, among others, two waitresses that attracted my attention. One was a beautiful, pale young girl, to whom I never spoke, for she was employed far away from the table which I affected. The other, a stout, middle-aged managing Breton woman, had sole command over my table and me, and gradually she began to assume such a maternal tone towards me that I saw I should be compelled to leave that restaurant. If I was absent for a couple of nights running she would reproach me sharply: "What! you are unfaithful to me?" Once, when I complained about some French beans, she informed me roundly that French beans were a subject which I did not understand. I then decided to be eternally unfaithful to her, and I abandoned the restaurant. A few nights before the final parting an old woman came into the restaurant to dine. She was fat, shapeless, ugly, and grotesque. She had a ridiculous voice, and ridiculous gestures. It was easy to see that she lived alone, and that in the long lapse of years she had developed the kind of peculiarity which induces guffaws among the thoughtless. She was burdened with a lot of small parcels, which she kept dropping. She chose one seat; and then, not liking it, chose another; and then another. In a few moments she had the whole restaurant laughing at her. That my middle-aged Breton should laugh was indifferent to me, but I was pained to see a coarse grimace of giggling on the pale face of the beautiful young waitress to whom I had never spoken.

I reflected, concerning the grotesque diner: "This woman was once young, slim, perhaps beautiful; certainly free from these ridiculous mannerisms. Very probably she is unconscious of her singularities. Her case is a tragedy. One ought to be able to make a heartrending novel out of the history of a woman such as she." Every stout, ageing woman is not grotesque—far from it!—but there is an extreme pathos in the mere fact that every stout ageing woman was once a young girl with the unique charm of youth in her form and movements and in her mind. And the fact that the change from the young girl to the stout ageing woman is made up of an infinite number of infinitesimal changes, each unperceived by her, only intensifies the pathos.

It was at this instant that I was visited by the idea of writing the book which ultimately became "The Old Wives' Tale." Of course I felt that the woman who caused the ignoble mirth in the restaurant would not serve me as a type of heroine. For she was much too old and obviously unsympathetic. It is an absolute rule that the principal character of a novel must not be unsympathetic, and the whole modern tendency of realistic fiction is against oddness in a prominent figure. I knew that I must choose the sort of woman who would pass unnoticed in a crowd.

I put the idea aside for a long time, but it was never very distant from me. For several reasons it made a special appeal to me. I had always been a convinced admirer of Mrs. W. K. Clifford's most precious novel, "Aunt Anne," but I wanted to see in the story of an old woman many things that Mrs. W. K. Clifford had omitted from "Aunt Anne." Moreover, I had always revolted against the absurd youthfulness, the unfading youthfulness of the average heroine. And as a protest against this fashion, I was already, in 1903, planning a novel ("Leonora") of which the heroine was aged forty, and had daughters old enough to be in love. The reviewers, by the way, were staggered by my hardihood in offering a woman of forty as a subject of serious interest to the public. But I meant to go much farther than forty! Finally as a supreme reason, I had the example and the challenge of Guy de Maupassant's "Une Vie." In the nineties we used to regard "Une Vie" with mute awe, as being the summit of achievement in fiction. And I remember being very cross with Mr. Bernard Shaw because, having read "Une Vie" at the suggestion (I think) of Mr. William Archer, he failed to see in it anything very remarkable. Here I must confess that, in 1908, I read "Une Vie" again, and in spite of a natural anxiety to differ from Mr. Bernard Shaw, I was gravely disappointed with it. It is a fine novel, but decidedly inferior to "Pierre et Jean" or even "Fort Comme la Mort." To return to the year 1903. "Une Vie" relates the entire life history of a woman. I settled in the privacy of my own head that my book about the development of a young girl into a stout old lady must be the English "Une Vie." I have been accused of every fault except a lack of self-confidence, and in a few weeks I settled a further point, namely, that my book must "go one better" than "Une Vie," and that to this end it must be the life-history of two women instead of only one....