The Old Willow Tree and Other Stories 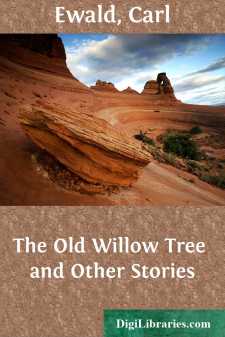 There are many kinds of willows and they are so unlike that you would hardly believe them to be relations.

There are some so small and wretched that they creep along the ground. They live on the heath, or high up in the mountains, or in the cold arctic regions. In the winter, they are quite hidden under the snow; in the summer, they just poke up their noses above the tops of the heather.

There are people who shrink from notice because they are so badly off. It is simply stupid to be ashamed of being poor; and the little dwarf-willows are not a bit ashamed. But they know that the soil they grow in is so poor that they can never attain the height of proper trees. If they tried to shoot up and began to carry their heads like their stately cousins the poplars, they would soon learn the difference.

For the poplars are their cousins. They are the stateliest of all the willow-trees and they know it, as any one can see by looking at them with half an eye. You only have to notice the way in which they hold themselves erect to perceive it.

"May I beg you kindly to give me a little bit of sunshine?" says the branch up in the air.

"Can I help you to a little bit of shadow?" says the branch down by the ground.

But the poplars sing a very different tune. With them it is:

"Every branch straight up on high! Close up to the trunk with you! There's nothing to stare at down below! Look above you! Heads up!... March!"

And all the branches strut right up to the sky and the whole tree shoots up, straight and proud as a pikestaff.

It's tiring. But it's elegant. And it pays. For has any one ever seen a smarter tree than one of those real, regular poplars, as stiff as a tin soldier and as tall as a steeple?

And, when the poplars stand along the road, in a long row on either side, you feel very respectful as you walk between them and are not in the least surprised when it appears that the avenue leads right up to a fine country-house.

The dwarf-willows and the poplars belong to the same family. The first are the commonest on the common side, the second are the smartest on the smart side. Between them are a number of other willow-trees. There are some whose leaves are like silver underneath and some whose leaves quiver so mournfully in the warm summer wind that the poets write verses about them. There are some whose branches droop so sorrowfully towards the ground that people plant them on their graves and some whose branches are so tough and flexible that people use them to weave baskets of. There are some out of which you can carve yourself a grand flute, if you know how. And then there are a heap about which there is nothing very remarkable to tell.

The willow-tree in this story was just one of the middling sort. But he had a destiny; and that is how he came to find his way into print.

His destiny began with this, that one of the proud poplars who stood in the avenue leading to the manor-house was blown down in a terrible storm....