The Man In The High-Water Boots 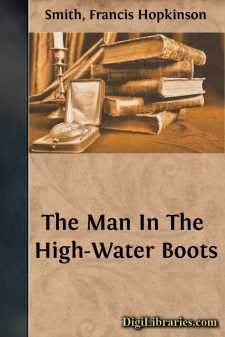 Now and then in my various prowlings I have met a man with a personality; one with mental equipment, heart endowment, self-forgetfulness, and charm—the kind of charm that makes you glad when he comes and sorry when he goes.

One was a big-chested, straight-backed, clear-eyed, clean-souled sea-dog, with arms of hickory, fingers of steel, and a brain in instant touch with a button marked "Experience and Pluck." Another was a devil-may-care, barefooted Venetian, who wore a Leporello hat canted over one eye and a scarlet sash about his thin, shapely waist, and whose corn teeth gleamed and flashed as he twisted his mustache or threw kisses to the pretty bead-stringers crossing Ponte Lungo. Still a third was a little sawed-off, freckled-faced, red-headed Irishman, who drove a cab through London fogs in winter, poled my punt among the lily-pads in summer, and hung wall-paper between times.

These I knew and loved; even now the cockles of my heart warm up when I think of them. Others I knew and liked; the difference being simply one of personality.

This time it is a painter who crosses my path—a mere lad of thirty two or three, all boy-heart, head, and brush. I had caught a glimpse of him in New York, when he "blew in" (no other phrase expresses his movement) where his pictures were being hung, and again in Philadelphia when some crushed ice and a mixture made it pleasant for everybody, but I had never examined all four sides of him until last summer.

We were at Dives at the time, lunching in the open courtyard of the inn, three of us, when the talk drifted toward the young painter, his life at his old mill near Eure and his successes at the Salon and elsewhere. Our host, the Sculptor, had come down in his automobile—a long, low, double-jointed crouching tiger—a forty-devil-power machine, fearing neither God nor man, and which is bound sooner or later to come to an untimely end and the scrap heap.

All about, fringing the tea tables and filling the summer air with their chatter and laughter, were gathered not only the cream, but the very top skimmings of all the fashion and folly of Trouville—twenty minutes away, automobile time—their blossoming hats, full-blown parasols, and pink and white veils adding another flower-bed to the quaint old courtyard.

With the return of the Man from the Latin Quarter, his other guest, who knew the ins and outs of the cellar, and who had gone in search of a certain vintage known only to the initiated (don't forget to ask for it when you go—it has no label, but the cork is sealed with yellow wax; M. Ramois, the good landlord, will know the kind—if he thinks you do), our host, the Sculptor, his mind still on his friend the painter, looked up and said, as he reached for the corkscrew:

"Why not go to-morrow? The mill is the most picturesque thing you ever saw—an old Louis XIII house and mill on the River Rille near Beaumont-le-Roger, once inhabited by the poet Chateaubriand. The river runs underground in the sands for some distance and comes out a few miles from Knight's—cold as ice and clear as crystal and packed full of trout. Besides Knight is at home—had a line from him this morning."

The Man from the Quarter laid down his glass....