The Man in Court 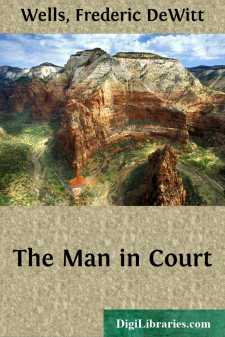 I A NIGHT COURT

In the Night Court the drama is vital and throbbing. As the saddest object to contemplate is a play where the essentials are wrong, so in this court the fundamentals of the law are the cause of making it an uncomfortable and pathetic spectacle.

The women who are brought before the Night Court are not heroines, but the criminal law does not seem better than they. It makes little attempt to mitigate any of the wretchedness that it judges; in many cases it moves only to inflict an additional burden of suffering. The result is tragedy.

The magistrate sits high, between standards of brass lamps. His black gown, the metal buttons and gleaming shields of the waiting police officers, the busy court officials behind the long desks on either hand tell of the majesty of the law.

In front of the desk but at a lower level is a space of ten or twelve feet running across the court-room in which are patrolmen, plain-clothes men, detectives, women prisoners, probation officers, reporters, witnesses, investigators, and lawyers. Beyond in the court-room a large crowd is on the benches. There are witnesses, brothers and sisters, friends of the prisoners waiting to see whether they go out through the street entrance or back through the strong barred gate seen through the door on the left. Also there are the "sharks" waiting to follow out the released prisoners, to prey upon them as the circumstances may favor; and a number of curiosity seekers watching intently. For them it can be nothing but a morbid dumb show, for they are so far from the bench that not a word of the proceedings could be heard. Only once in a while the shrieks and imprecations of a struggling hysterical woman as she is hurried out of court can enliven the scene.

Fortified with a letter of introduction to the judge and a disposition that will not be too easily shocked at seeing conditions of life as they actually exist, the spectator may find his way past the policeman at the gate in the rail. It clicks behind him ominously and he wonders whether he will have difficulty in getting out. Finally through clerks and officials who become more kindly as they learn he is a friend of the judge, he is seated in a chair drawn up beside the bench. The magistrate is a hearty round-faced man who seems almost human in spite of his gown and the dignity of his surroundings. The court looks different from this point of view and he may easily watch the judicial enforcement of the law supreme.

The organization of these courts is simple. There are not many rules or technicalities. The judges are patient, hard working, understanding, and efficient. The trouble is with the laws they are called upon to administer: Laws which are as absurd, as farcical, and as impracticable as the plot of the lightest musical comedy.

At first the visitor can hardly understand what is going on. A pale-faced man is in the witness chair, on his left a bedraggled little woman is standing before and below the judge, her eyes just level with the top of the desk....