The Love Sonnets of a Hoodlum 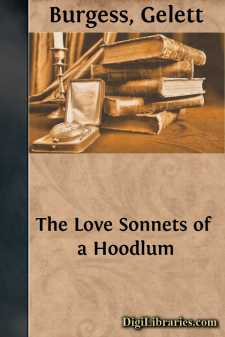 "Tell me, ye muses, what hath former agesNow left succeeding times to play upon,And what remains unthought on by those sagesWhere a new muse may try her pinion?"

So Complained Phineas Fletcher in his Purple Island as long ago as 1633. Three centuries have brought to the development of lyric passion no higher form than that of the sonnet cycle. The sonnet has been likened to an exquisite crystal goblet that holds one sublimely inspired thought so perfectly that not another drop can be added without overflow. Cast in the early Italian Renaissance by Dante, Petrarch and Camoens, it was chased and ornamented during the Elizabethan period by Shakespere, and filled with its most stimulating draughts of song and love during the Victorian era by Rossetti, Browning and Meredith. And now, in this first year of the new century, the historic cup is refilled and tossed off in a radiant toast to Erato by Wallace Irwin.

The attribute of modernity is not given to every new age. The cogs in the wheels of time slip back, at times. The classic revival may be permeated with enthusiasm, but it is a second edition of an old work—not a virile essay at expression of living thought. The later Renaissance was but half modern in its spirit; the classic period of the eighteenth century in England was half ancient in its mood. But the twentieth century breaks with a new promise of emancipation to English Literature, for a new influence has freshened the blood of conventional style that in the decadence of the End of the Century had grown dilute. This adjuvant strain is found in the enthusiasm of Slang. Slowly its rhetorical power has won foothold in the language. It has won many a verb and substantive, it has conquered idiom and diction, and now it is strong enough to assault the very syntax of our Anglo-Saxon tongue.[*]

[*] Note, for instance, the potential mood used indicatively in the current colloquial, "Wouldn't that jar you!"

Slang, the illegitimate sister of Poetry, makes with her a common cause against the utilitarian economy of Prose. They both stand for lavish luxuriance in trope and involution, for floriation and adornment of thought. It is their boast to make two words bloom where one grew before. Both garb themselves in Metaphor, and the only complaint of the captious can be that whereas Poetry follows the accepted style, Slang dresses her thought to suit herself in fantastic and bizarre caprices, that her whims are unstable and too often in bad taste.

But this odium given to Slang by superficial minds is undeserved. In other days, before the language was crystallized into the idiom and verbiage of the doctrinaire, prose, too, was untrammeled. Indeed, a cursory glance at the Elizabethan poets discloses a kinship with the rebellious fancies of our modern colloquial talk. Mr. Irwin's sonnets may be taken as an indication of this revolt, and how nearly they approach the incisive phrases of the seventeenth century may easily be shown in a few exemplars. For instance, in Sonnet XX, "You're the real tan bark!" we have a close parallel in Johnson's Volpone, or The Fox:

"Fellows of outside and mere bark!"

And this instance is an equally good illustration also of that curious process which, in the English language, has in time created for a single word ("cleave," for instance) two exactly opposite meanings....