The Life of Admiral Viscount Exmouth 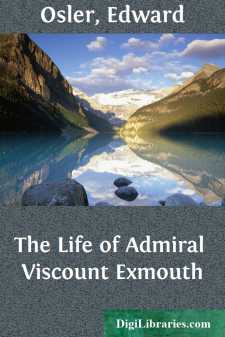 The life and services of Lord Exmouth are of no common interest; not more because he has advanced the reputation of his country, and connected his name with her history, than that he began his career an almost unfriended orphan, and rose to the highest honours of his profession without having been indebted to fortune or to patronage. One of the most interesting spectacles is that of rising merit struggling from its difficulties. The most encouraging, is the honour which rewards its exertions. The young officer, who, like him, has devoted himself to an arduous service, with nothing to rely on but his sword, may derive instruction from his example, and encouragement from his success.

Edward Pellew, Viscount Exmouth, descended from a family which was settled in the west of Cornwall for many centuries, but came originally from Normandy, where the name is still met with. After the close of the war he received a letter from a family there, claiming kindred, and offering the name and armorial bearings in proof. The original orthography, "Pelleu," was retained until a comparatively recent period. They are said to have landed at Pengersick Castle, near St. Michael's Mount, and appear to have remained in that part of the county until the beginning of the 17th century. They had a family tomb in Breage, a parish on the eastern side of the Mount's Bay, in which they had acquired property, and they still possess a small estate in that neighbourhood. Part of this early history, it will be seen, can rest only upon tradition; and indeed, it is of very little importance. The weakness of seeking credit from remote ancestors, for one whose personal honours require no further illustration, may well be exploded. But there is one kind of ancestry where an inquiry will always be interesting—that where the traits which distinguished the founder of a family may be traced in the character of his forefathers.

The earliest of the family of whom anything is certainly known lived during the great rebellion at Plymouth, where his loyalty made him so obnoxious to the republicans, that the mob on one occasion assaulted him on the Hoe, and plundered his house. A small piece of antique plate, still preserved, and bearing the date 1645, was the only article of value saved from them. His son, Captain Pellew, Lord Exmouth's great-grandfather, served in the navy during the war of the succession. A very fine portrait of him remains.

Humphry Pellew, the grandfather, was an extensive merchant. He held a large property in shipping, and traded chiefly to America, where he had purchased a valuable tobacco plantation of 2,000 acres, in Kent Island, Maryland. Of this estate, upon which the town of Annapolis Royal is partly built, the writings remain, but the property was lost at the revolt of the colonies. No portion of the compensation fund voted by Parliament was in this instance ever received; and General Washington afterwards declared to a friend of the family, that the fact of three of the brothers having borne arms against the States would prevent the success of any application to the American Government.

Mr. Pellew built part of Flushing, a large village on the shores of Falmouth harbour, including the present manor-house, in which he resided; but this, being leasehold property, has long ago reverted to the lord. In 1692, he married Judith Sparnon, of Sparnon and Pengelly, in Breage, by whom he had six sons and five daughters. Mr. Pellew maintained a high character through life, and his memory was long preserved among the older inhabitants of the village. He died in 1721. His son Israel married Miss Trefusis, upon whom the estate of Trefusis, which includes Flushing, was entailed, in default of more direct heirs from the then possessor; Thomas married Miss Whittaker, who was grand-daughter of Viscount Fauconberg by a daughter of Cromwell; three died unmarried; and the children of the youngest son were at length the only male survivors of the family.

Samuel, youngest son of Humphry Pellew, commanded a Post-office packet on the Dover station, to which he had been appointed through the interest of the Spencer family....