The Legends of King Arthur and His Knights 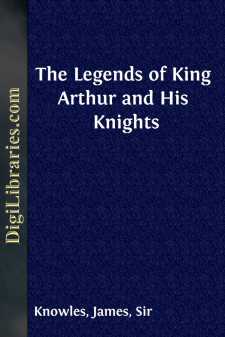 The Prophecies of Merlin, and the Birth of Arthur

ing Vortigern the usurper sat upon his throne in London, when, suddenly, upon a certain day, ran in a breathless messenger, and cried aloud—

“Arise, Lord King, for the enemy is come; even Ambrosius and Uther, upon whose throne thou sittest—and full twenty thousand with them—and they have sworn by a great oath, Lord, to slay thee, ere this year be done; and even now they march towards thee as the north wind of winter for bitterness and haste.”

At those words Vortigern’s face grew white as ashes, and, rising in confusion and disorder, he sent for all the best artificers and craftsmen and mechanics, and commanded them vehemently to go and build him straightway in the furthest west of his lands a great and strong castle, where he might fly for refuge and escape the vengeance of his master’s sons—“and, moreover,” cried he, “let the work be done within a hundred days from now, or I will surely spare no life amongst you all.”

Then all the host of craftsmen, fearing for their lives, found out a proper site whereon to build the tower, and eagerly began to lay in the foundations. But no sooner were the walls raised up above the ground than all their work was overwhelmed and broken down by night invisibly, no man perceiving how, or by whom, or what. And the same thing happening again, and yet again, all the workmen, full of terror, sought out the king, and threw themselves upon their faces before him, beseeching him to interfere and help them or to deliver them from their dreadful work.

Filled with mixed rage and fear, the king called for the astrologers and wizards, and took counsel with them what these things might be, and how to overcome them. The wizards worked their spells and incantations, and in the end declared that nothing but the blood of a youth born without mortal father, smeared on the foundations of the castle, could avail to make it stand. Messengers were therefore sent forthwith through all the land to find, if it were possible, such a child. And, as some of them went down a certain village street, they saw a band of lads fighting and quarrelling, and heard them shout at one—“Avaunt, thou imp!—avaunt! Son of no mortal man! go, find thy father, and leave us in peace.”

At that the messengers looked steadfastly on the lad, and asked who he was. One said his name was Merlin; another, that his birth and parentage were known by no man; a third, that the foul fiend alone was his father. Hearing the things, the officers seized Merlin, and carried him before the king by force.

But no sooner was he brought to him than he asked in a loud voice, for what cause he was thus dragged there?

“My magicians,” answered Vortigern, “told me to seek out a man that had no human father, and to sprinkle my castle with his blood, that it may stand.”

“Order those magicians,” said Merlin, “to come before me, and I will convict them of a lie.”

The king was astonished at his words, but commanded the magicians to come and sit down before Merlin, who cried to them—

“Because ye know not what it is that hinders the foundation of the castle, ye have advised my blood for a cement to it, as if that would avail; but tell me now rather what there is below that ground, for something there is surely underneath that will not suffer the tower to stand?”

The wizards at these words began to fear, and made no answer....