The Humorous Poetry of the English Language; from Chaucer to Saxe 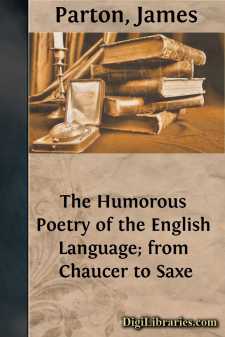 The design of the projector of this volume was, that it should contain the Best of the shorter humorous poems in the literatures of England and the United States, except:

Poems so local or cotemporary in subject or allusion, as not to be readily understood by the modern American reader;

Poems which, from the freedom of expression allowed in the healthy ages, can not now be read aloud in a company of men and women;

Poems that have become perfectly familiar to every body, from their incessant reproduction in school-books and newspapers; and

Poems by living American authors, who have collected their humorous pieces from the periodicals in which most of them originally appeared, and given them to the world in their own names.

Holmes, Saxe, and Lowell are, therefore, only REPRESENTED in this collection. To have done more than fairly represent them, had been to infringe rights which are doubly sacred, because they are not protected by law. To have done less would have deprived the reader of a most convenient means of observing that, in a kind of composition confessed to be among the most difficult, our native wits are not excelled by foreign.

The editor expected to be embarrassed with a profusion of material for his purpose. But, on a survey of the poetical literature of the two countries, it was discovered that, of really excellent humorous poetry, of the kinds universally interesting, untainted by obscenity, not marred by coarseness of language, nor obscured by remote allusion, the quantity in existence is not great. It is thought that this volume contains a very large proportion of the best pieces that haveappeared.

An unexpected feature of the book is, that there is not a line in it by a female hand. The alleged foibles of the Fair have given occasion to libraries of comic verse; yet, with diligent search, no humorous poems by women have been found which are of merit sufficient to give them claim to a place in a collection like this. That lively wit and graceful gayety, that quick perception of the absurd, which ladies are continually displaying in their conversation and correspondence, never, it seems, suggest the successful epigram, or inspire happy satirical verse.

The reader will not be annoyed by an impertinent superfluity of notes. At the end of the volume may be found a list of the sources from which its contents have been taken. For the convenience of those who live remote from biographical dictionaries, a few dates and other particulars have been added to the mention of each name. For valuable contributions to this portion of the volume, and for much well-directed work upon other parts of it, the reader is indebted to Mr. T. BUTLER GUNN, of this city.

There is, certainly, nothing more delightful than the fun of a man of genius. Humor, as Mr. Thackeray observes, is charming, and poetry is charming, but the blending of the two in the same composition is irresistible. There is much nonsense in this book, and some folly, and a little ill-nature; but there is more wisdom than either....