The History of David Grieve 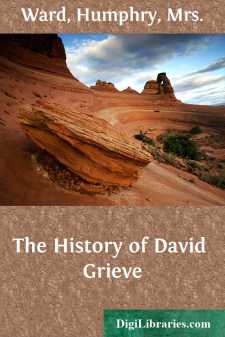 'David, yo go for 't,' said the child addressed to a boy by her side, nodding her head insolently towards the speaker, a tall and bony woman, who stood on the steps the children had just descended, holding out a battered hat.

'Yo're a careless thing, Louie,' said the boy, but he went back and took the hat.

'Mak her tie it,' said the woman, showing an antiquated pair of strings. 'If she loses it she needna coom cryin for anudder. She'd lose her yead if it wor loose.'

Then she turned and went back into the house. It was a smallish house of grey stone, three windows above, two and a door below. Dashes of white on the stone gave, as it were, eyebrows to the windows, and over the door there was a meagre trellised porch, up which grew some now leafless roses and honeysuckles. To the left of the door a scanty bit of garden was squeezed in between the hill, against which the house was set edgeways, and the rest of the flat space, occupied by the uneven farmyard, the cart-shed and stable, the cow-houses and duck-pond. This garden contained two shabby apple trees, as yet hardly touched by the spring; some currant and gooseberry bushes, already fairly green; and a clump or two of scattered daffodils and wallflowers. The hedge round it was broken through in various places, and it had a casual neglected air.

The children went their way through the yard. In front of them a flock of some forty sheep and lambs pushed along, guarded by two black short-haired collies. The boy, brandishing a long stick, opened a gate deplorably in want of mending, and the sheep crowded through, keenly looked after by the dogs, who waited meanwhile on their flanks with heads up, ears cocked, and that air of self-restrained energy which often makes a sheep-dog more human than his master. The field beyond led to a little larch plantation, where a few primroses showed among the tufts of long, rich grass, and the drifts of last year's leaves. Here the flock scattered a little, but David and the dogs were after them in a twinkling, and the plantation gate was soon closed on the last bleating mother. Then there was nothing more for the boy to do than to go up to the top of the green rising ground on which the farm stood and see if the gate leading to the moor was safely shut. For the sheep he had been driving were not meant for the open moorland. Their feeding grounds lay in the stone-walled fields round the homestead, and had they strayed on to the mountain beyond, which was reserved for a hardier Scotch breed, David would have been answerable. So he strode, whistling, up the hill to have a look at that top gate, while Louie sauntered down to the stream which ran round the lower pastures to wait for him.

The top gate was fast, but David climbed the wall and stood there a while, hands in his pockets, legs apart, whistling and looking.

'They can't see t' Downfall from Stockport to-day,' he was saying to himself; 'it's coomin ower like mad.'

Some distance away in front of him, beyond the undulating heather ground at his feet, rose a magnificent curving front of moor, the steep sides of it crowned with black edges and cliffs of grit, the outline of the south-western end sweeping finely up on the right to a purple peak, the king of all the moorland round....