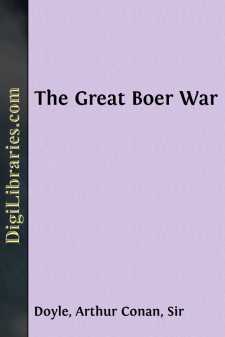 PREFACE TO THE FINAL EDITION.

During the course of the war some sixteen Editions of this work have appeared, each of which was, I hope, a little more full and accurate than that which preceded it. I may fairly claim, however, that the absolute mistakes made have been few in number, and that I have never had occasion to reverse, and seldom to modify, the judgments which I have formed. In this final edition the early text has been carefully revised and all fresh available knowledge has been added within the limits of a single volume narrative. Of the various episodes in the latter half of the war it is impossible to say that the material is available for a complete and final chronicle. By the aid, however, of the official dispatches, of the newspapers, and of many private letters, I have done my best to give an intelligible and accurate account of the matter. The treatment may occasionally seem too brief but some proportion must be observed between the battles of 1899-1900 and the skirmishes of 1901-1902.

My private informants are so numerous that it would be hardly possible, even if it were desirable, that I should quote their names. Of the correspondents upon whose work I have drawn for my materials, I would acknowledge my obligations to Messrs. Burleigh, Nevinson, Battersby, Stuart, Amery, Atkins, Baillie, Kinneir, Churchill, James, Ralph, Barnes, Maxwell, Pearce, Hamilton, and others. Especially I would mention the gentleman who represented the 'Standard' in the last year of the war, whose accounts of Vlakfontein, Von Donop's Convoy, and Tweebosch were the only reliable ones which reached the public.

Take a community of Dutchmen of the type of those who defended themselves for fifty years against all the power of Spain at a time when Spain was the greatest power in the world. Intermix with them a strain of those inflexible French Huguenots who gave up home and fortune and left their country for ever at the time of the revocation of the Edict of Nantes. The product must obviously be one of the most rugged, virile, unconquerable races ever seen upon earth. Take this formidable people and train them for seven generations in constant warfare against savage men and ferocious beasts, in circumstances under which no weakling could survive, place them so that they acquire exceptional skill with weapons and in horsemanship, give them a country which is eminently suited to the tactics of the huntsman, the marksman, and the rider. Then, finally, put a finer temper upon their military qualities by a dour fatalistic Old Testament religion and an ardent and consuming patriotism. Combine all these qualities and all these impulses in one individual, and you have the modern Boer—the most formidable antagonist who ever crossed the path of Imperial Britain. Our military history has largely consisted in our conflicts with France, but Napoleon and all his veterans have never treated us so roughly as these hard-bitten farmers with their ancient theology and their inconveniently modern rifles....