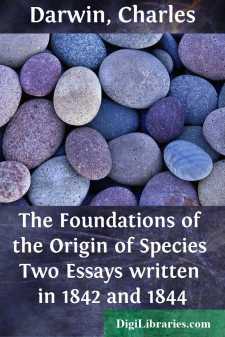 We know from the contents of Charles Darwin’s Note Book of 1837 that he was at that time a convinced Evolutionist. Nor can there be any doubt that, when he started on board the Beagle, such opinions as he had were on the side of immutability. When therefore did the current of his thoughts begin to set in the direction of Evolution?

We have first to consider the factors that made for such a change. On his departure in 1831, Henslow gave him vol. I. of Lyell's Principles, then just published, with the warning that he was not to believe what he read. But believe he did, and it is certain (as Huxley has forcibly pointed out) that the doctrine of uniformitarianism when applied to Biology leads of necessity to Evolution. If the extermination of a species is no more catastrophic than the natural death of an individual, why should the birth of a species be any more miraculous than the birth of an individual? It is quite clear that this thought was vividly present to Darwin when he was writing out his early thoughts in the 1837 Note Book:—

“Propagation explains why modern animals same type as extinct, which is law almost proved. They die, without they change, like golden pippins; it is a generation of species like generation of individuals.”

“If species generate other species their race is not utterly cut off.”

These quotations show that he was struggling to see in the origin of species a process just as scientifically comprehensible as the birth of individuals. They show, I think, that he recognised the two things not merely as similar but as identical.

It is impossible to know how soon the ferment of uniformitarianism began to work, but it is fair to suspect that in 1832 he had already begun to see that mutability was the logical conclusion of Lyell’s doctrine, though this was not acknowledged by Lyell himself.

There were however other factors of change. In his Autobiography he wrote:—“During the voyage of the Beagle I had been deeply impressed by discovering in the Pampean formation great fossil animals covered with armour like that on the existing armadillos; secondly, by the manner in which closely allied animals replace one another in proceeding southward over the Continent; and thirdly, by the South American character of most of the productions of the Galapagos archipelago, and more especially by the manner in which they differ slightly on each island of the group; none of the islands appearing to be very ancient in a geological sense. It was evident that such facts as these, as well as many others, could only be explained on the supposition that species gradually become modified; and the subject haunted me.”

Again we have to ask: how soon did any of these influences produce an effect on Darwin’s mind? Different answers have been attempted. Huxley held that these facts could not have produced their essential effect until the voyage had come to an end, and the “relations of the existing with the extinct species and of the species of the different geographical areas with one another were determined with some exactness.” He does not therefore allow that any appreciable advance towards evolution was made during the actual voyage of the Beagle....