The Forsyte Saga, Volume II. Indian Summer of a Forsyte In Chancery 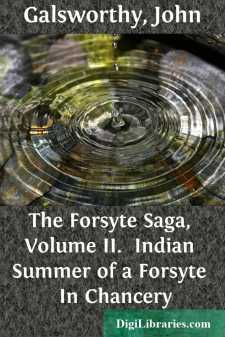 In the last day of May in the early 'nineties, about six o'clock of the evening, old Jolyon Forsyte sat under the oak tree below the terrace of his house at Robin Hill. He was waiting for the midges to bite him, before abandoning the glory of the afternoon. His thin brown hand, where blue veins stood out, held the end of a cigar in its tapering, long-nailed fingers—a pointed polished nail had survived with him from those earlier Victorian days when to touch nothing, even with the tips of the fingers, had been so distinguished. His domed forehead, great white moustache, lean cheeks, and long lean jaw were covered from the westering sunshine by an old brown Panama hat. His legs were crossed; in all his attitude was serenity and a kind of elegance, as of an old man who every morning put eau de Cologne upon his silk handkerchief. At his feet lay a woolly brown-and-white dog trying to be a Pomeranian—the dog Balthasar between whom and old Jolyon primal aversion had changed into attachment with the years. Close to his chair was a swing, and on the swing was seated one of Holly's dolls—called 'Duffer Alice'—with her body fallen over her legs and her doleful nose buried in a black petticoat. She was never out of disgrace, so it did not matter to her how she sat. Below the oak tree the lawn dipped down a bank, stretched to the fernery, and, beyond that refinement, became fields, dropping to the pond, the coppice, and the prospect—'Fine, remarkable'—at which Swithin Forsyte, from under this very tree, had stared five years ago when he drove down with Irene to look at the house. Old Jolyon had heard of his brother's exploit—that drive which had become quite celebrated on Forsyte 'Change. Swithin! And the fellow had gone and died, last November, at the age of only seventy-nine, renewing the doubt whether Forsytes could live for ever, which had first arisen when Aunt Ann passed away. Died! and left only Jolyon and James, Roger and Nicholas and Timothy, Julia, Hester, Susan! And old Jolyon thought: 'Eighty-five! I don't feel it—except when I get that pain.'

His memory went searching. He had not felt his age since he had bought his nephew Soames' ill-starred house and settled into it here at Robin Hill over three years ago. It was as if he had been getting younger every spring, living in the country with his son and his grandchildren—June, and the little ones of the second marriage, Jolly and Holly; living down here out of the racket of London and the cackle of Forsyte 'Change,' free of his boards, in a delicious atmosphere of no work and all play, with plenty of occupation in the perfecting and mellowing of the house and its twenty acres, and in ministering to the whims of Holly and Jolly. All the knots and crankiness, which had gathered in his heart during that long and tragic business of June, Soames, Irene his wife, and poor young Bosinney, had been smoothed out. Even June had thrown off her melancholy at last—witness this travel in Spain she was taking now with her father and her stepmother. Curiously perfect peace was left by their departure; blissful, yet blank, because his son was not there. Jo was never anything but a comfort and a pleasure to him nowadays—an amiable chap; but women, somehow—even the best—got a little on one's nerves, unless of course one admired them.

Far-off a cuckoo called; a wood-pigeon was cooing from the first elm-tree in the field, and how the daisies and buttercups had sprung up after the last mowing! The wind had got into the sou' west, too—a delicious air, sappy! He pushed his hat back and let the sun fall on his chin and cheek. Somehow, to-day, he wanted company—wanted a pretty face to look at. People treated the old as if they wanted nothing. And with the un-Forsytean philosophy which ever intruded on his soul, he thought: 'One's never had enough. With a foot in the grave one'll want something, I shouldn't be surprised!' Down here—away from the exigencies of affairs—his grandchildren, and the flowers, trees, birds of his little domain, to say nothing of sun and moon and stars above them, said, 'Open, sesame,' to him day and night. And sesame had opened—how much, perhaps, he did not know. He had always been responsive to what they had begun to call 'Nature,' genuinely, almost religiously responsive, though he had never lost his habit of calling a sunset a sunset and a view a view, however deeply they might move him. But nowadays Nature actually made him ache, he appreciated it so. Every one of these calm, bright, lengthening days, with Holly's hand in his, and the dog Balthasar in front looking studiously for what he never found, he would stroll, watching the roses open, fruit budding on the walls, sunlight brightening the oak leaves and saplings in the coppice, watching the water-lily leaves unfold and glisten, and the silvery young corn of the one wheat field; listening to the starlings and skylarks, and the Alderney cows chewing the cud, flicking slow their tufted tails; and every one of these fine days he ached a little from sheer love of it all, feeling perhaps, deep down, that he had not very much longer to enjoy it....