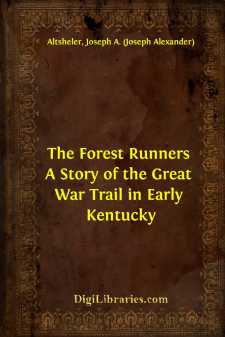 Paul stopped in a little open space, and looked around all the circle of the forest. Everywhere it was the same—just the curving wall of red and brown, and beyond, the blue sky, flecked with tiny clouds of white. The wilderness was full of beauty, charged with the glory of peace and silence, and there was naught to indicate that man had ever come. The leaves rippled a little in the gentle west wind, and the crisping grass bowed before it; but Paul saw no living being, save himself, in the vast, empty world.

The boy was troubled and, despite his life in the woods, he had full right to be. This was the great haunted forest of Kain-tuck-ee, where the red man made his most desperate stand, and none ever knew when or whence danger would come. Moreover, he was lost, and the forest told him nothing; he was not like his friend, Henry Ware, born to the forest, the heir to all the primeval instincts, alive to every sight and sound, and able to read the slightest warning the wilderness might give. Paul Cotter was a student, a lover of books, and a coming statesman. Fate, it seemed, had chosen that he and Henry Ware should go hand in hand, but for different tasks.

Paul gazed once more around the circle of the glowing forest, and the shadow in his eyes deepened. Henry and the horses, loaded with powder for the needy settlement, must be somewhere near, but whether to right or left he could not tell. He had gone to look for water, and when he undertook to return he merely went deeper and deeper into the forest. Now the boughs, as they nodded before the gentle breeze, seemed to nod to him in derision. He felt shame as well as alarm. Henry would not laugh at him, but the born scholar would be worth, for the time, at least, far less than the born trailer.

Yet no observer, had there been any, would have condemned Paul as he condemned himself. He stood there, a tall, slender boy, with a broad, high brow, white like a girl's above the line of his cap, blue eyes, dark and full, with the width between that indicates the mind behind, and the firm, pointed chin that belongs so often to people of intellect.

Paul and Henry were on their way from Wareville, their home, with horses hearing powder for Marlowe, the nearest settlement, nearly a hundred miles away. The secret of making powder from the nitre dust on the floors of the great caves of Kentucky had been discovered by the people of Wareville, and now they wished to share their unfailing supply with others, in order that the infant colony might be able to withstand Indian attacks. Henry Ware, once a captive in a far Northwestern tribe, and noted for his great strength and skill, had been chosen, with Paul Cotter, his comrade, to carry it. Both rejoiced in the great task, which to them meant the saving of Kentucky.

Paul's eyes were apt at times to have a dreamy look, as if he were thinking of things far away, whether of time or place; but now they were alive to the present, and to the forest about him. He listened intently....