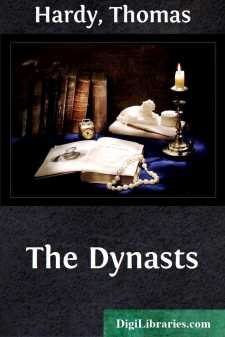 Add to My Favorites
Published: 9 years ago
Downloads: 102
Rating: (0 Votes)

The Spectacle here presented in the likeness of a Drama is concerned with the Great Historical Calamity, or Clash of Peoples, artificially brought about some hundred years ago.

The choice of such a subject was mainly due to three accidents of locality. It chanced that the writer was familiar with a part of England that lay within hail of the watering-place in which King George the Third had his favourite summer residence during the war with the first Napoleon, and where he was visited by ministers and others who bore the weight of English affairs on their more or less competent shoulders at that stressful time. Secondly, this district, being also near the coast which had echoed with rumours of invasion in their intensest form while the descent threatened, was formerly animated by memories and traditions of the desperate military preparations for that contingency. Thirdly, the same countryside happened to include the village which was the birthplace of Nelson's flag-captain at Trafalgar.

When, as the first published result of these accidents, The Trumpet Major was printed, more than twenty years ago, I found myself in the tantalizing position of having touched the fringe of a vast international tragedy without being able, through limits of plan, knowledge, and opportunity, to enter further into its events; a restriction that prevailed for many years. But the slight regard paid to English influence and action throughout the struggle by those Continental writers who had dealt imaginatively with Napoleon's career, seemed always to leave room for a new handling of the theme which should re-embody the features of this influence in their true proportion; and accordingly, on a belated day about six years back, the following drama was outlined, to be taken up now and then at wide intervals ever since.

It may, I think, claim at least a tolerable fidelity to the facts of its date as they are give in ordinary records. Whenever any evidence of the words really spoken or written by the characters in their various situations was attainable, as close a paraphrase has been aimed at as was compatible with the form chosen. And in all cases outside the oral tradition, accessible scenery, and existing relics, my indebtedness for detail to the abundant pages of the historian, the biographer, and the journalist, English and Foreign, has been, of course, continuous.

It was thought proper to introduce, as supernatural spectators of the terrestrial action, certain impersonated abstractions, or Intelligences, called Spirits. They are intended to be taken by the reader for what they may be worth as contrivances of the fancy merely. Their doctrines are but tentative, and are advanced with little eye to a systematized philosophy warranted to lift "the burthen of the mystery" of this unintelligible world. The chief thing hoped for them is that they and their utterances may have dramatic plausibility enough to procure for them, in the words of Coleridge, "that willing suspension of disbelief for the moment which constitutes poetic faith." The wide prevalence of the Monistic theory of the Universe forbade, in this twentieth century, the importation of Divine personages from any antique Mythology as ready-made sources or channels of Causation, even in verse, and excluded the celestial machinery of, say, Paradise Lost, as peremptorily as that of the Iliad or the Eddas....