The Cutting of an Agate 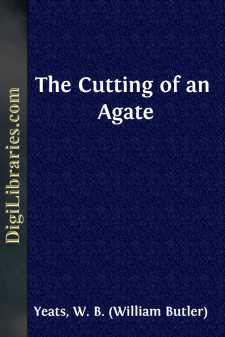 CUCHULAIN AND HIS CYCLE

The Church when it was most powerful taught learned and unlearned to climb, as it were, to the great moral realities through hierarchies of Cherubim and Seraphim, through clouds of Saints and Angels who had all their precise duties and privileges. The story-tellers of Ireland, perhaps of every primitive country, imagined as fine a fellowship, only it was to the æsthetic realities they would have had us climb. They created for learned and unlearned alike, a communion of heroes, a cloud of stalwart witnesses; but because they were as much excited as a monk over his prayers, they did not think sufficiently about the shape of the poem and the story. We have to get a little weary or a little distrustful of our subject, perhaps, before we can lie awake thinking how to make the most of it. They were more anxious to describe energetic characters, and to invent beautiful stories, than to express themselves with perfect dramatic logic or in perfectly-ordered words. They shared their characters and their stories, their very images, with one another, and handed them down from generation to generation; for nobody, even when he had added some new trait, or some new incident, thought of claiming for himself what so obviously lived its own merry or mournful life. The maker of images or worker in mosaic who first put Christ upon a cross would have as soon claimed as his own a thought which was perhaps put into his mind by Christ himself. The Irish poets had also, it may be, what seemed a supernatural sanction, for a chief poet had to understand not only innumerable kinds of poetry, but how to keep himself for nine days in a trance. Surely they believed or half believed in the historical reality of even their wildest imaginations. And so soon as Christianity made their hearers desire a chronology that would run side by side with that of the Bible, they delighted in arranging their Kings and Queens, the shadows of forgotten mythologies, in long lines that ascended to Adam and his Garden. Those who listened to them must have felt as if the living were like rabbits digging their burrows under walls that had been built by Gods and Giants, or like swallows building their nests in the stone mouths of immense images, carved by nobody knows who. It is no wonder that one sometimes hears about men who saw in a vision ivy-leaves that were greater than shields, and blackbirds whose thighs were like the thighs of oxen. The fruit of all those stories, unless indeed the finest activities of the mind are but a pastime, is the quick intelligence, the abundant imagination, the courtly manners of the Irish country-people.

William Morris came to Dublin when I was a boy, and I had some talk with him about these old stories. He had intended to lecture upon them, but ‘the ladies and gentlemen’—he put a communistic fervour of hatred into the phrase—knew nothing about them. He spoke of the Irish account of the battle of Clontarf and of the Norse account, and said, that one saw the Norse and Irish tempers in the two accounts....