The Coryston Family A Novel 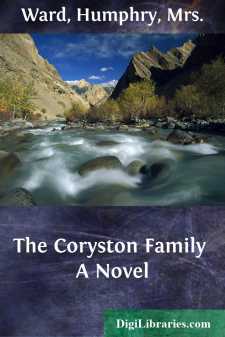 The hands of the clock on the front of the Strangers' Gallery were nearing six. The long-expected introductory speech of the Minister in charge of the new Land Bill was over, and the leader of the Opposition was on his feet. The House of Commons was full and excited. The side galleries were no less crowded than the benches below, and round the entrance-door stood a compact throng of members for whom no seats were available. With every sentence, almost, the speaker addressing the House struck from it assent or protest; cheers and counter-cheers ran through its ranks; while below the gangway a few passionate figures on either side, the freebooters of the two great parties, watched one another angrily, sitting on the very edge of their seats, like arrows drawn to the string.

Within that privileged section of the Ladies' Gallery to which only the Speaker's order admits, there was no less agitation than on the floor below, though the signs of it were less evident. Some half a dozen chairs placed close against the grille were filled by dusky forms invisible, save as a dim patchwork, to the House beneath them—women with their faces pressed against the lattice-work which divided them from the Chamber, endeavoring to hear and see, in spite of all the difficulties placed in their way by a graceless Commons. Behind them stood other women, bending forward sometimes over the heads of those in front, in the feverish effort to catch the words of the speech. It was so dark in the little room that no inmate of it could be sure of the identity of any other unless she was close beside her; and it was pervaded by a constant soft frou-frou of silk and satin, as persons from an inner room moved in and out, or some lady silently gave up her seat to a new-comer, or one of those in front bent over to whisper to a friend behind. The background of all seemed filled with a shadowy medley of plumed hats, from which sometimes a face emerged as a shaft of faint light from the illumined ceiling of the House struck upon it.

The atmosphere was very hot, and heavy with the scent of violets, which seemed to come from a large bunch worn by a slim standing girl. In front of the girl sat a lady who was evidently absorbed in the scene below. She rarely moved, except occasionally to put up an eyeglass the better to enable her to identify some face on the Parliamentary benches, or the author of some interruption to the speaker. Meanwhile the girl held her hands upon the back of the lady's chair, and once or twice stooped to speak to her.

Next to this pair, but in a corner of the gallery, and occupying what seemed to be a privileged and habitual seat, was a woman of uncouth figure and strange headgear. Since the Opposition leader had risen, her attention had wholly wandered. She yawned perpetually, and talked a great deal to a lady behind her. Once or twice her neighbor threw her an angry glance. But it was too dark for her to see it; though if she had seen it she would have paid no attention....