by Vinton A. (Vinton Adams) Dearing 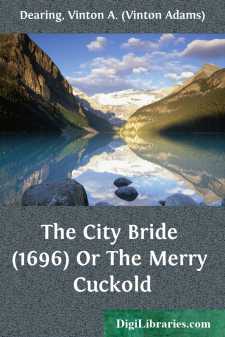 Not much is known of its author, Joseph Harris. Genest first notices him as playing Bourcher, the companion of a French pirate, in A Common-Wealth of Women. Thomas Durfey’s alteration of The Sea Voyage from the Beaumont and Fletcher folio, which was produced about September 1685. His subsequent roles were of a similar calibre, but if he never rose to be a star he seems to have become a valued supporting player, for in 1692 he was chosen to join the royal “comedians in ordinary.” He did not at first side with Thomas Betterton in his quarrel with the patentees of the theatre in 1694-5, but he withdrew with him to Lincoln’s Inn Fields. Genest notices him for the last time as playing Sir Richard Vernon in Betterton’s adaptation of 1 Henry IV, which was produced about April 1700.

During his career on the stage Harris found time to compose a tragi-comedy, The Mistakes, or, The False Report (1691), produced in December 1690; The City Bride, produced in 1696; and a comedy and a masque, Love’s a Lottery, and a Woman the Prize. With a New Masque, call’d Love and Riches Reconcil’d (1699), produced about March 1698/9. The Mistakes is clearly apprentice work, for Harris acknowledges in a preface the considerable help of William Mountfort, who took the part of the villain, Ricardo. Mountfort, who had already written three plays himself, cut one of the scenes intended for the fifth act and inserted one of his own composition (probably the last) which not only clarified the plot but also elevated the character of the part he was to play. The company seems to have done its best by the budding dramatist, for Dryden wrote the prologue, a rather unusual one in prose and verse, and Tate supplied the epilogue. Harris professed himself satisfied with the play’s reception, but owned that it was Mountfort’s acting which really carried it off.

The City Bride, on the other hand, shows its author completely self-assured, and rightly so. No doubt some of his ease comes from the fact that he had nothing to invent, but in large part it must derive from his ten-years’ experience on the stage. Harris added nothing to the plot of The City Bride, although he commendably shifted its emphasis, as his title makes clear, from infidelity to fidelity; but he rewrote the dialogue almost completely, and the new dialogue is remarkable good. The reader will notice that it is, except for the last half of the first act, printed as prose. The quarto of A Cure for a Cuckold, from which Harris worked, is also largely printed as prose, but has correct verse lineation in the same portion of the first act. It is the more remarkable that Harris, following thus closely the apparent form of his original, could vary from it so successfully. Most notable, probably, are the passages in which he intensified the expression of his source. They may indicate no more than the eternal “ham” in our author; but I think they probably indicate as well a new style of acting, more rhetorical in one way, more natural in another. A good example, in which the new rhetoric is not oppressive, is the account of the sea fight at the end of Act III. Even when Harris followed his original most closely, we seem to hear the actor, speaking in a new tongue, in a more relaxed and colloquial rhythm. The reader will find it both amusing and instructive to compare the two versions of Act II, scene ii. The new cadences do more than merely prove that Harris had no ear for blank verse.

The City Bride does not conform to the dominant type of Restoration comedy, but it belongs to a thriving tradition. Domestic comedy, in adaptations from the Elizabethans, had been staged at intervals for twenty years before The City Bride appeared, and the type was of course destined to supplant gay comedy in the near future....