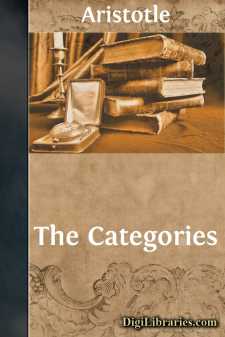 On the other hand, things are said to be named 'univocally' which have both the name and the definition answering to the name in common. A man and an ox are both 'animal', and these are univocally so named, inasmuch as not only the name, but also the definition, is the same in both cases: for if a man should state in what sense each is an animal, the statement in the one case would be identical with that in the other.

Things are said to be named 'derivatively', which derive their name from some other name, but differ from it in termination. Thus the grammarian derives his name from the word 'grammar', and the courageous man from the word 'courage'.

Forms of speech are either simple or composite. Examples of the latter are such expressions as 'the man runs', 'the man wins'; of the former 'man', 'ox', 'runs', 'wins'.

By being 'present in a subject' I do not mean present as parts are present in a whole, but being incapable of existence apart from the said subject.

If genera are different and co-ordinate, their differentiae are themselves different in kind....