The Case of Richard Meynell 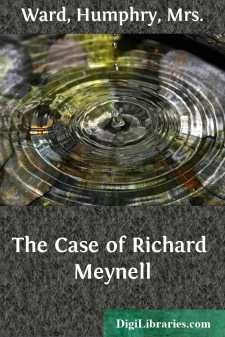 May I ask those of my American readers who are not intimately acquainted with the conditions of English rural and religious life to remember that the dominant factor in it—the factor on which the story of Richard Meynell depends—is the existence of the State Church, of the great ecclesiastical corporation, the direct heir of the pre-Reformation Church, which owns the cathedrals and the parish churches, which by right of law speaks for the nation on all national occasions, which crowns and marries and buries the Kings of England, and, through her bishops in the House of Lords, exercises a constant and important influence on the lawmaking of the country? This Church possesses half the elementary schools, and is the legal religion of the great public schools which shape the ruling upper class. She is surrounded with the prestige of centuries, and it is probable that in many directions she was never so active or so well served by her members as she is at present.

At the same time, there are great forces of change ahead. Outside the Anglican Church stands quite half the nation, gathered in the various non-conformist bodies—Wesleyan, Congregational, Baptist, Presbyterian, and so on. Between them and the Church exists a perpetual warfare, partly of opinion, partly of social difference and jealousy. In every village and small town this warfare exists. The non-conformist desires to deprive the Church of her worldly and political privileges; the churchman talks of the sin of schism, or draws up schemes of reunion which drop still-born. Meanwhile, alike in the Church, in non-conformity, and in the neutral world which owes formal allegiance to neither, vast movements of thought have developed in the last hundred years, years as pregnant with the germs of new life as the wonderful hundred years that followed the birth of Christ. Whether the old bottles can be adjusted to the new wine, whether further division or a new Christian unity is to emerge from the strife of tongues, whether the ideas of modernism; rife in all forms of Christianity, can be accommodated to the ancient practices and given a share in the great material possessions of a State Church; how individual lives are affected in the passionate struggle of spiritual faiths and practical interests involved in such an attempt; how conscience may be enriched by its success or sterilized by its failure; how the fight itself, ably waged, may strengthen the spiritual elements, the power of living and suffering in men and women—it is with such themes that this story attempts to deal. Twenty-two years ago I tried a similar subject in "Robert Elsmere." Since then the movement of ideas in religion and philosophy has been increasingly rapid and fruitful. I am deeply conscious how little I may be able to express it. But those who twenty years ago welcomed the earlier book—and how can I ever forget its reception in America!—may perhaps be drawn once again to some of the old themes in their new dress....