The Business of Being a Woman 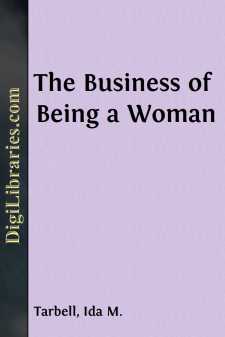 Add to My Favorites
Published: 9 years ago
Downloads: 122
Rating: (0 Votes)

CHAPTER I The Uneasy Woman

The most conspicuous occupation of the American woman of to-day, dressing herself aside, is self-discussion. It is a disquieting phenomenon. Chronic self-discussion argues chronic ferment of mind, and ferment of mind is a serious handicap to both happiness and efficiency. Nor is self-discussion the only exhibit of restlessness the American woman gives. To an unaccustomed observer she seems always to be running about on the face of things with no other purpose than to put in her time. He points to the triviality of the things in which she can immerse herself—her fantastic and ever-changing raiment, the welter of lectures and other culture schemes which she supports, the eagerness with which she transports herself to the ends of the earth—as marks of a spirit not at home with itself, and certainly not convinced that it is going in any particular direction or that it is committed to any particular worth-while task.

Perhaps the most disturbing side of the phenomenon is that it is coincident with the emancipation of woman. At a time when she is freer than at any other period of the world's history—save perhaps at one period in ancient Egypt—she is apparently more uneasy.

Those who do not like the exhibit are inclined to treat her as if she were a new historical type. The reassuring fact is, that ferment of mind is no newer thing in woman than in man. It is a human ailment. Its attacks, however, have always been unwelcome. Society distrusts uneasiness in sacred quarters; that is, in her established and privileged works. They are the best mankind has to show for itself. At least they are the things for which the race has slaved longest and which so far have best resisted attack. We would like to pride ourselves that they were permanent, that we had settled some things. And hence society resents a restless woman. And this is logical enough.

Embroiled as man is in an eternal effort to conquer, understand, and reduce to order both nature and his fellows, it is imperative that he have some secure spot where his head is not in danger, his heart is not harassed. Woman, by virtue of the business nature assigns her, has always been theoretically the maker and keeper of this necessary place of peace. But she has rarely made it and kept it with full content. Eve was a revoltée, so was Medea. In every century they have appeared, restless Amazons, protesting and remolding. Out of their uneasy souls have come the varying changes in the woman's world which distinguish the ages.

Society has not liked it—was there to be no quiet anywhere? It is poor understanding that does not appreciate John Adams' parry of his wife Abigail's list of grievances, which she declared the Continental Congress must relieve if it would avoid a woman's rebellion. Under the stress of the Revolution children, apprentices, schools, colleges, Indians, and negroes had all become insolent and turbulent, he told her. What was to become of the country if women, "the most numerous and powerful tribe in the world," grew discontented?

Now this world-old restlessness of the women has a sound and a tragic cause....