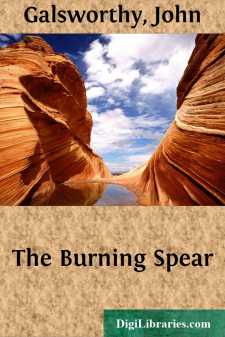 In the year —— there dwelt on Hampstead Heath a small thin gentleman of fifty-eight, gentle disposition, and independent means, whose wits had become somewhat addled from reading the writings and speeches of public men. The castle which, like every Englishman, he inhabited was embedded in lilac bushes and laburnums, and was attached to another castle, embedded, in deference to our national dislike of uniformity, in acacias and laurustinus. Our gentleman, whose name was John Lavender, had until the days of the Great War passed one of those curious existences are sometimes to be met with, in doing harm to nobody. He had been brought up to the Bar, but like most barristers had never practised, and had spent his time among animals and the wisdom of the past. At the period in which this record opens he owned a young female sheep-dog called Blink, with beautiful eyes obscured by hair; and was attended to by a thin and energetic housekeeper, in his estimation above all weakness, whose name was Marian Petty, and by her husband, his chauffeur, whose name was Joe.

It was the ambition of our hero to be, like all public men, without fear and without reproach. He drank not, abstained from fleshly intercourse, and habitually spoke the truth. His face was thin, high cheek-boned, and not unpleasing, with one loose eyebrow over which he had no control; his eyes, bright and of hazel hue, looked his fellows in the face without seeing what was in it. Though his moustache was still dark, his thick waving hair was permanently white, for his study was lined from floor to ceiling with books, pamphlets, journals, and the recorded utterances of great mouths. He was of a frugal habit, ate what was put before him without question, and if asked what he would have, invariably answered: "What is there?" without listening to the reply. For at mealtimes it was his custom to read the writings of great men.

"Joe," he would say to his chauffeur, who had a slight limp, a green wandering eye, and a red face, with a rather curved and rather redder nose, "You must read this."

And Joe would answer:

"He has done wonders for the country. Listen to this." And Mr. Lavender would read as follows: "If I had fifty sons I would give them all. If I had forty daughters they should nurse and scrub and weed and fill shells; if I had thirty country-houses they should all be hospitals; if I had twenty pens I would use them all day long; if had ten voices they should never cease to inspire and aid my country."

"If 'e had nine lives," interrupted Joe, with a certain suddenness, "'e'd save the lot."

"I cannot bear cynicism, Joe; there is no quality so unbecoming to a gentleman."

"Joe, Mr. Lavender would say you are, incorrigible...."

Our gentleman, in common with all worthy of the name, had a bank-book, which, in hopes that it would disclose an unsuspected balance, he would have "made up" every time he read an utterance exhorting people to invest and save their country....