The Birth of the War-God A Poem by Kalidasa 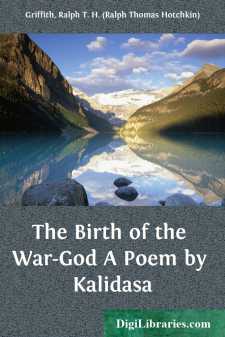 Of the history of Kálidása, to whom by general assent the Kumára Sambhava, or Birth of the War-God, is attributed, we know but little with any certainty; we can only gather from a memorial-verse which enumerates their names, that he was one of the 'Nine Precious Stones' that shone at the Court of Vikramáditya, King of Oujein, in the half century immediately preceding the Christian era. As the examination of arguments for and against the correctness of this date is not likely to interest general readers, I must request them to rest satisfied with the belief that about the time when Virgil and Horace were shedding an undying lustre upon the reign of Augustus, our poet Kálidása lived, loved, and sang, giving and taking honour, at the polished court of the no less munificent patron of Sanskrit literature, at the period of its highest perfection.

Little as we know of Indian poetry, here and there an English reader may be found, who is not entirely unacquainted with the name or works of the author of the beautiful dramas of Sakontalá and The Hero and the Nymph, the former of which has long enjoyed an European celebrity in the translation of Sir William Jones, and the latter is one of the most charming of Professor Wilson's specimens of the Hindú Theatre; here and there even in England may be found a lover of the graceful, tender, picturesque, and fanciful, who knows something, and would gladly know more, of the sweet poet of the Cloud Messenger, and The Seasons; whilst in Germany he has been deeply studied in the original, and enthusiastically admired in translation,—not the Orientalist merely, but the poet, the critic, the natural philosopher,—a Goethe, a Schlegel, a Humboldt, having agreed, on account of his tenderness of feeling and his rich creative imagination, to set Kálidása very high among the glorious company of the Sons of Song.

That the poem which is now for the first time offered to the general reader, in an English dress, will not diminish this reputation is the translator's earnest hope, yet my admiration of the grace and beauty that pervade so much of the work must not allow me to deny that occasionally, even in the noble Sanskrit, if we judge him by an European standard, Kálidása is bald and prosaic. Nor is this a defence of the translator at the expense of the poet. Fully am I conscious how far I am from being able adequately to reproduce the fanciful creation of the sweet singer of Oujein; that numerous beauties of thought and expression I may have passed by, mistaken, marred; that in many of the more elaborate descriptions my own versification is 'harsh as the jarring of a tuneless chord' compared with the melody of Kálidása's rhythm, to rival whose sweetness and purity of language, so admirably adapted to the soft repose and celestial rosy hue of his pictures, would have tried all the fertility of resource, the artistic skill, and the exquisite ear of the author of Lalla Rookh himself. I do not think this poem deserves, and I am sure it will not obtain, that admiration which the author's masterpieces already made known at once commanded; at all events, if the work itself is not inferior, it has not enjoyed the good fortune of having a Jones or a Wilson for translator....