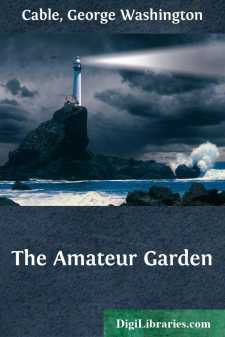 A lifelong habit of story-telling has much to do with the production of these pages.

All the more does it move me because it has always included, as perhaps it does in most story-tellers, a keen preference for true stories, stories of actual occurrence.

A flower-garden trying to be beautiful is a charming instance of something which a storyteller can otherwise only dream of. For such a garden is itself a story, one which actually and naturally occurs, yet occurs under its master's guidance and control and with artistic effect.

Yet it was this same story-telling bent which long held me back while from time to time I generalized on gardening and on gardens other than my own. A well-designed garden is not only a true story happening artistically but it is one that passes through a new revision each year, "with the former translations diligently compared and revised." Each year my own acre has confessed itself so full of mistranslations of the true text of gardening, has promised, each season, so much fairer a show in its next edition, and has been kept so prolongedly busy teaching and reteaching its master where to plant what, while as to money outlays compelled to live so much more like a poet than like a prince, that the bent for story-telling itself could not help but say wait.

Now, however, the company to which this chapter logically belongs is actually showing excellent reasons why a history of their writer's own acre should lead them. Let me, then, begin by explaining that the small city of Northampton, Massachusetts, where I have lived all the latter three-fifths of my adult years, sits on the first rise of ground which from the west overlooks the alluvial meadows of the Connecticut, nine miles above South Hadley Falls. Close at its back a small stream, Mill River, coming out of the Hampshire hills on its way to the Connecticut, winds through a strip of woods so fair as to have been named—from a much earlier day than when Jenny Lind called it so—"Paradise." On its town side this wooded ground a few hundred yards wide drops suddenly a hundred feet or so to the mill stream and is cut into many transverse ravines.

In its timber growth, conspicuous by their number, tower white-pines, while among them stand only less loftily a remarkable variety of forest trees imperfectly listed by a certain humble authority as "mostly h-oak, h-ellum, and h-ash, with a little 'ickory."

Imperfectly listed, for there one may find also the birch and the beech, the linden, sycamore, chestnut, poplar, hemlock-spruce, butternut, and maple overhanging such pleasant undergrowths as the hornbeam and hop-hornbeam, willows, black-cherry and choke-cherry, dogwood and other cornels, several viburnums, bush maples of two or three kinds, alder, elder, sumach, hazel, witch-hazel, the shadblow and other perennial, fair-blooming, sweet-smelling favorites, beneath which lies a leaf-mould rife with ferns and wild flowers.

From its business quarter the town's chief street of residence, Elm Street, begins a gently winding westerly ascent to become an open high-road from one to another of the several farming and manufacturing villages that use the water-power of Mill River....