Talks To Teachers On Psychology; And To Students On Some Of Life's Ideals 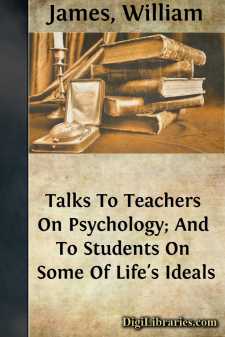 TALKS TO TEACHERS I. PSYCHOLOGY AND THE TEACHING ART

In the general activity and uprising of ideal interests which every one with an eye for fact can discern all about us in American life, there is perhaps no more promising feature than the fermentation which for a dozen years or more has been going on among the teachers. In whatever sphere of education their functions may lie, there is to be seen among them a really inspiring amount of searching of the heart about the highest concerns of their profession. The renovation of nations begins always at the top, among the reflective members of the State, and spreads slowly outward and downward. The teachers of this country, one may say, have its future in their hands. The earnestness which they at present show in striving to enlighten and strengthen themselves is an index of the nation's probabilities of advance in all ideal directions. The outward organization of education which we have in our United States is perhaps, on the whole, the best organization that exists in any country. The State school systems give a diversity and flexibility, an opportunity for experiment and keenness of competition, nowhere else to be found on such an important scale. The independence of so many of the colleges and universities; the give and take of students and instructors between them all; their emulation, and their happy organic relations to the lower schools; the traditions of instruction in them, evolved from the older American recitation-method (and so avoiding on the one hand the pure lecture-system prevalent in Germany and Scotland, which considers too little the individual student, and yet not involving the sacrifice of the instructor to the individual student, which the English tutorial system would seem too often to entail),—all these things (to say nothing of that coeducation of the sexes in whose benefits so many of us heartily believe), all these things, I say, are most happy features of our scholastic life, and from them the most sanguine auguries may be drawn.

Having so favorable an organization, all we need is to impregnate it with geniuses, to get superior men and women working more and more abundantly in it and for it and at it, and in a generation or two America may well lead the education of the world. I must say that I look forward with no little confidence to the day when that shall be an accomplished fact.

No one has profited more by the fermentation of which I speak, in pedagogical circles, than we psychologists. The desire of the schoolteachers for a completer professional training, and their aspiration toward the 'professional' spirit in their work, have led them more and more to turn to us for light on fundamental principles. And in these few hours which we are to spend together you look to me, I am sure, for information concerning the mind's operations, which may enable you to labor more easily and effectively in the several schoolrooms over which you preside.

Far be it from me to disclaim for psychology all title to such hopes....