Studies and Essays: Quality and Others 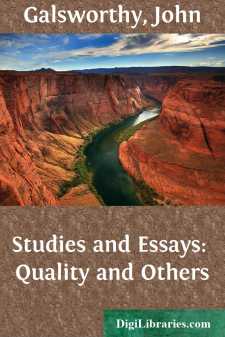 I knew him from the days of my extreme youth, because he made my father's boots; inhabiting with his elder brother two little shops let into one, in a small by-street-now no more, but then most fashionably placed in the West End.

That tenement had a certain quiet distinction; there was no sign upon its face that he made for any of the Royal Family—merely his own German name of Gessler Brothers; and in the window a few pairs of boots. I remember that it always troubled me to account for those unvarying boots in the window, for he made only what was ordered, reaching nothing down, and it seemed so inconceivable that what he made could ever have failed to fit. Had he bought them to put there? That, too, seemed inconceivable. He would never have tolerated in his house leather on which he had not worked himself. Besides, they were too beautiful—the pair of pumps, so inexpressibly slim, the patent leathers with cloth tops, making water come into one's mouth, the tall brown riding boots with marvellous sooty glow, as if, though new, they had been worn a hundred years. Those pairs could only have been made by one who saw before him the Soul of Boot—so truly were they prototypes incarnating the very spirit of all foot-gear. These thoughts, of course, came to me later, though even when I was promoted to him, at the age of perhaps fourteen, some inkling haunted me of the dignity of himself and brother. For to make boots—such boots as he made—seemed to me then, and still seems to me, mysterious and wonderful.

I remember well my shy remark, one day, while stretching out to him my youthful foot:

And his answer, given with a sudden smile from out of the sardonic redness of his beard: "Id is an Ardt!"

Himself, he was a little as if made from leather, with his yellow crinkly face, and crinkly reddish hair and beard; and neat folds slanting down his cheeks to the corners of his mouth, and his guttural and one-toned voice; for leather is a sardonic substance, and stiff and slow of purpose. And that was the character of his face, save that his eyes, which were grey-blue, had in them the simple gravity of one secretly possessed by the Ideal. His elder brother was so very like him—though watery, paler in every way, with a great industry—that sometimes in early days I was not quite sure of him until the interview was over. Then I knew that it was he, if the words, "I will ask my brudder," had not been spoken; and that, if they had, it was his elder brother.

When one grew old and wild and ran up bills, one somehow never ran them up with Gessler Brothers. It would not have seemed becoming to go in there and stretch out one's foot to that blue iron-spectacled glance, owing him for more than—say—two pairs, just the comfortable reassurance that one was still his client.

For it was not possible to go to him very often—his boots lasted terribly, having something beyond the temporary—some, as it were, essence of boot stitched into them....