Stories from Le Morte D'Arthur and the Mabinogion 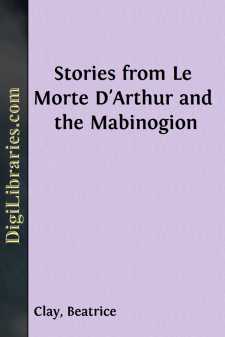 OF ARTHUR'S BIRTH; AND HOW HE BECAME KING

Long years ago, there ruled over Britain a king called Uther Pendragon. A mighty prince was he, and feared by all men; yet, when he sought the love of the fair Igraine of Cornwall, she would have naught to do with him, so that, from grief and disappointment, Uther fell sick, and at last seemed like to die.

Now in those days, there lived a famous magician named Merlin, so powerful that he could change his form at will, or even make himself invisible; nor was there any place so remote but that he could reach it at once, merely by wishing himself there. One day, suddenly he stood at Uther's bedside, and said: "Sir King, I know thy grief, and am ready to help thee. Only promise to give me, at his birth, the son that shall be born to thee, and thou shalt have thy heart's desire." To this the king agreed joyfully, and Merlin kept his word: for he gave Uther the form of one whom Igraine had loved dearly, and so she took him willingly for her husband.

When the time had come that a child should be born to the King and Queen, Merlin appeared before Uther to remind him of his promise; and Uther swore it should be as he had said. Three days later, a prince was born, and, with pomp and ceremony, was christened by the name of Arthur; but immediately thereafter, the King commanded that the child should be carried to the postern-gate, there to be given to the old man who would be found waiting without.

Not long after, Uther fell sick, and he knew that his end was come; so, by Merlin's advice, he called together his knights and barons, and said to them: "My death draws near. I charge you, therefore, that ye obey my son even as ye have obeyed me; and my curse upon him if he claim not the crown when he is a man grown." Then the King turned his face to the wall and died.

Scarcely was Uther laid in his grave before disputes arose. Few of the nobles had seen Arthur or even heard of him, and not one of them would have been willing to be ruled by a child; rather, each thought himself fitted to be king, and, strengthening his own castle, made war on his neighbours until confusion alone was supreme, and the poor groaned because there was none to help them.

Now when Merlin carried away Arthur—for Merlin was the old man who had stood at the postern-gate—he had known all that would happen, and had taken the child to keep him safe from the fierce barons until he should be of age to rule wisely and well, and perform all the wonders prophesied of him. He gave the child to the care of the good knight Sir Ector to bring up with his son Kay, but revealed not to him that it was the son of Uther Pendragon that was given into his charge.

At last, when years had passed and Arthur was grown a tall youth well skilled in knightly exercises, Merlin went to the Archbishop of Canterbury and advised him that he should call together at Christmas-time all the chief men of the realm to the great cathedral in London; "For," said Merlin, "there shall be seen a great marvel by which it shall be made clear to all men who is the lawful King of this land." The Archbishop did as Merlin counselled....