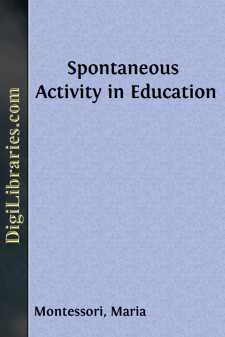 A SURVEY OF THE CHILD'S LIFE

The general laws which govern the child's psychical health have their parallel in those of its physical health.—Many persons who have asked me to continue my methods of education for very young children on lines that would make them suitable for those over seven years of age, have expressed a doubt whether this would be possible.

The difficulties they put forward are mainly of a moral order.

Should not the child now begin to respect the will of others rather than his own? Should he not some day brace himself to a real effort, compelling him to carry out a necessary, rather than a chosen, task? Finally, should he not learn self-sacrifice, since man's life is not a life of ease and enjoyment?

Some, taking certain practical items of elementary education, which present themselves even at the age of six, and must be seriously envisaged at seven, urge their objection in this form: Now we are face to face with the ugly specter of arithmetical tables, the arid mental gymnastics exacted by grammar. What do you propose? Would you abolish all this, or do you admit that the child must inevitably bow to these necessities?

It is obvious that the whole of the argument revolves round the interpretation of that "liberty" which is the avowed basis of the system of education advocated by me.

Perhaps in a short time all these objections will provoke a smile, and I shall be asked to suppress them, together with my commentary on them, in future editions of this work. But at the present time they have a right to exist, and to be dealt with, although indeed it is not very easy to give a direct, clear and convincing answer to them, because this entails the raising of questions on which everybody has firmly rooted convictions.

A parallel may perhaps serve to save us a good deal of the work. Indirectly, these questions have been answered already by the progress made in the treatment of infants under the guidance of hygiene. How were they treated formerly? Many, no doubt, can still remember certain practises that were regarded as indispensable by the masses. An infant had to be strapped and swaddled, or its legs would grow crooked; the ligament under its tongue had to be slit, to ensure its speaking eventually; it was important that it should always wear a cap to keep its ears from protruding; the position of a recumbent baby was so arranged as not to cause permanent deformity of the tender skull; and good mothers stroked and pinched the little noses of their nurslings to make them grow long and sharp instead of round and snub, and put little gold earrings through the lobes of their ears very soon after birth "to improve their eyesight." Such practises may be already forgotten in some countries; but in others they obtain to this day. Who does not remember the various devices for helping a baby to walk? Even in the first months after birth, at a period of life when the nervous system is not completely developed, and it is impossible for the infant to coordinate its movements, mothers wasted several half-hours of the day "teaching baby to walk." Holding the little creature by the body, they watched the aimless movements of the tiny feet, and deluded themselves with the belief that the child was already making an effort to walk; and because it does actually by degrees begin to arch its feet and move its legs more boldly, the mother attributed its progress to her instruction....