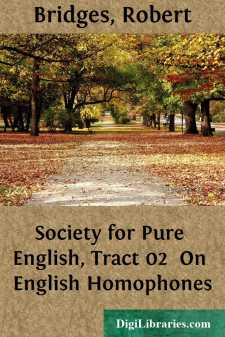 When two or more words different in origin and signification are pronounced alike, whether they are alike or not in their spelling, they are said to be homophonous, or homophones of each other. Such words if spoken without context are of ambiguous signification. Homophone is strictly a relative term, but it is convenient to use it absolutely, and to call any word of this kind a homophone.

Homophony is between words as significant sounds, but it is needful to state that homophonous words must be different words, else we should include a whole class of words which are not true homophones. Such words as draft, train, board, have each of them separate meanings as various and distinct as some true homophones; for instance, a draught of air, the miraculous draught of fishes, the draught of a ship, the draft of a picture, or a draught of medicine, or the present draft of this essay, though it may ultimately appear medicinal, are, some of them, quite as distinct objects or notions as, for instance, vane and vein are: but the ambiguity of draft, however spelt, is due to its being the name of anything that is drawn; and since there are many ways of drawing things, and different things are drawn in different ways, the same word has come to carry very discrepant significations.

Though such words as these are often inconveniently and even distressingly ambiguous, they are not homophones, and are therefore excluded from my list: they exhibit different meanings of one word, not the same sound of different words: they are of necessity present, I suppose, in all languages, and corresponding words in independent languages will often develop exactly corresponding varieties of meaning. But since the ultimate origin and derivation of a word is sometimes uncertain, the scientific distinction cannot be strictly enforced.

Now, wherever the same derivation of any two same-sounding words is at all doubtful, such words are practically homophones:—and again in cases where the derivation is certainly the same, yet, if the ultimate meanings have so diverged that we cannot easily resolve them into one idea, as we always can draft, these also may be practically reckoned as homophones.

Continent, adjective and substantive, is an example of absolute divergence of meaning, inherited from the Latin; but as they are different parts of speech, I allow their plea of identical derivation and exclude them from my list. On the other hand, the substantive beam is an example of such a false homophone as I include. Beam may signify a balk of timber, or a ray of light. Milton's address to light begins

and this is the commonest use of the word in poetry, and probably in literature: Shelley has

Then the bright child the plumèd seraph came

And fixed its blue and beaming eyes on mine.

But in Tyndal's gospel we read

the beam that is in thine own eye...?