Slave Narratives: a Folk History of Slavery in the United States From Interviews with Former Slaves, North Carolina Narratives, Part 2 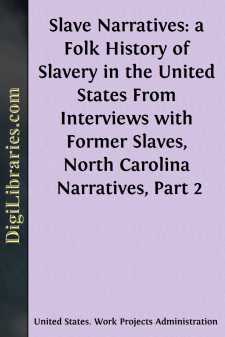 "I was born in 1851, in the yard where my owner lived next door to the City Hall. I remember when they was finishin' up the City Hall. I also remember the foreman, Mr. James Walker, he was general manager. The overseen (overseer) was Mr. Keen. I remember all the bricklayers; they all was colored. The man that plastered the City Hall was named George Price, he plastered it inside. The men that plastered the City Hall outside and put those colum's up in the front, their names was Robert Finey and William Finey, they both was colored. Jim Artis now was a contractor an' builder. He done a lot of work 'round Wilmin'ton.

"Yes'm, they was slaves, mos' all the fine work 'round Wilmin'ton was done by slaves. They called 'em artisans. None of 'em could read, but give 'em any plan an' they could foller it to the las' line."

Interviewer: "Did the owner collect the pay for the labor, Uncle Jackson?"

"No, ma'm. That they did'n. We had a lot of them artisans 'mongst our folks. They all lived on our place with they fam'lies. They hired theyselves where they pleased. They colle'ted they pay, an' the onliest thing the owner took was enough to support they fam'lies. They all lived in our yard, it was a great big place, an' they wimmen cooked for 'em and raised the chilluns.

"We went to church regular. All our people marched behind our owners, an' sat up in the galle'y of the white folks church. Now, them that went to St. James Church behind their white folks didn' dare look at nobody else. 'Twant allowed. They were taught they were better than anybody else. That was called the 'silk stockin' church. Nobody else was fitten to look at.

"My mother was the laund'ess for the white folks. In those days ladies wore clo'es, an' plenty of 'em. My daddy was one of the part Indian folks. My mammy was brought here from Washin'ton City, an' when her owner went back home he sold her to my folks. You know, round Washin'ton an' up that way they was Ginny (Guinea) niggers, an' that's what my mammy was. We had a lot of these malatto negroes round here, they was called 'Shuffer Tonies', they was free issues and part Indian. The leader of 'em was James Sampson. We child'en was told to play in our own yard and not have nothin' to do with free issue chil'en or the common chil'en 'cross the street, white or colored, because they was'nt fitten to 'sociate with us. You see our owners was rich folks. Our big house is the one where the ladies of Sokosis (Sorosis) has their Club House, an' our yard spread all round there, an' our house servants, an' some of the bes' artisans in Wilmin'ton lived in our yard.

"I remember when the Zoabbes company came from Georgia here to Wilmin'ton an' they had all ladies as officers.

"I remember when the Confederates captured part of the Union Army at Fort Sumter, S.C., and they brought them here to Wilmin'ton and put them out under Fourth Street bridge, and the white ladies of Wilmin'ton, N.C. cooked food and carried it by baskets full to them. We all had plenty of food. A warehouse full of everything down there by the river nigh Red Cross Street, an' none of us ever went hungry 'till the war was over.

"I remember when Gen'ral Grant's Army came to the river. They mounted guns to boombar the city. Mr. John Dawson an' Mr. Silas Martin, they went on the corner of Second an' Nun Streets on the top of Ben Berry's house an' run up a white sheet for a flag, an' the Yankees did'n' boombar us. An' Mr. Martin gave his house up to the Progro Marshells, and my mother cleaned up the house an' washed for them. Her name was Caroline West.

"I remember when that Provo Marshell told the colored people that any house in Wilmin'ton they liked, that was empty, they could go take it, an' the first one they took was the fine Bellamy Mansion on Market an' Fifth Street."

"Uncle Jackson", asked the interviewer, "don't you remember that house was headquarters of the Federal Army? How could colored people occupy it?"

Uncle Jackson: "I don't remember nothin' about Federal soldiers bein' in that house, but I'm tellin' you I knows a lot of common colored folks was in it because I seen 'em sittin' on the piazza an' all up an' down those big front steps....