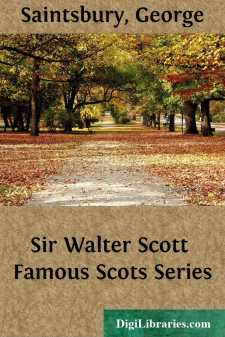 Scott's own 'autobiographic fragment,' printed in Lockhart's first volume, has made other accounts of his youth mostly superfluous, even to a day which persists in knowing better about everything and everybody than it or they knew about themselves. No one ever recorded his genealogy more minutely, with greater pride, or with a more saving sense of humour than Sir Walter. He was connected, though remotely, with gentle families on both sides. That is to say, his great-grandfather was son of the Laird of Raeburn, who was grandson of Walter Scott of Harden and the 'Flower of Yarrow.' The great-grandson, 'Beardie,' acquired that cognomen by letting his beard grow like General Dalziel, though for the exile of James II., instead of the death of Charles I.—'whilk was the waur reason,' as Sir Walter himself might have said.

Beardie's second son, being more thoroughly sickened of the sea in his first voyage than Robinson Crusoe, took to farming and Whiggery, and married the daughter of Haliburton of Newmains—there was also Macdougal and Campbell blood on the spindle side of the older generations of the family. Their eldest son Walter, father of Sir Walter, was born in 1729, and, being bred to the law, became the original, according to undisputed tradition, of the 'Saunders Fairford' of Redgauntlet, the most autobiographical as well as not the least charming of the novels. He married Anne Rutherford, who, through her mother, brought the blood of the Swintons of Swinton to enrich the joint strain; and from her father, a member of a family distinguished in the annals of the University of Edinburgh, may have transmitted some of the love for books which was not the most prominent feature of the other ingredients.

Walter himself was the third 'permanent child' (to adopt an agreeable phrase of Mr. Traill's about another person) of a family of twelve, only five of whom survived infancy. His three brothers, John, Thomas, and Daniel, and his sister Anne, all figure in the records; but little is heard of John and not much of Anne. Thomas, the second, either had, or was thought by his indulgent brother to have, literary talents, and was at one time put up to father the novels; while Daniel (whose misconduct in money matters, and still more in showing the white feather, brought on him the only display of anything that can be called rancour recorded in Sir Walter's history) concerns us even less. The date of the novelist's birth was 15th August 1771, the place, 'the top of the College Wynd,' a locality now whelmed in the actual Chambers Street face of the present Old University buildings, and near that of Kirk of Field. Escaping the real or supposed dangers of a consumptive wet-nurse, he was at first healthy enough; but teething or something else developed the famous lameness, which at first seemed to threaten loss of all use of the right leg. The child was sent to the house of his grandfather, the Whig farmer of Sandyknowe, where he abode for some years under the shadow of Smailholm Tower, reading a little, listening to Border legends a great deal, and making one long journey to London and Bath....