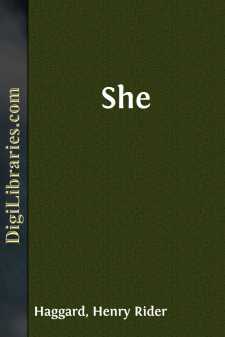 In giving to the world the record of what, looked at as an adventure only, is I suppose one of the most wonderful and mysterious experiences ever undergone by mortal men, I feel it incumbent on me to explain what my exact connection with it is. And so I may as well say at once that I am not the narrator but only the editor of this extraordinary history, and then go on to tell how it found its way into my hands.

Some years ago I, the editor, was stopping with a friend, "vir doctissimus et amicus neus," at a certain University, which for the purposes of this history we will call Cambridge, and was one day much struck with the appearance of two persons whom I saw going arm-in-arm down the street. One of these gentlemen was I think, without exception, the handsomest young fellow I have ever seen. He was very tall, very broad, and had a look of power and a grace of bearing that seemed as native to him as it is to a wild stag. In addition his face was almost without flaw—a good face as well as a beautiful one, and when he lifted his hat, which he did just then to a passing lady, I saw that his head was covered with little golden curls growing close to the scalp.

"Good gracious!" I said to my friend, with whom I was walking, "why, that fellow looks like a statue of Apollo come to life. What a splendid man he is!"

"Yes," he answered, "he is the handsomest man in the University, and one of the nicest too. They call him 'the Greek god'; but look at the other one, he's Vincey's (that's the god's name) guardian, and supposed to be full of every kind of information. They call him 'Charon.'" I looked, and found the older man quite as interesting in his way as the glorified specimen of humanity at his side. He appeared to be about forty years of age, and was I think as ugly as his companion was handsome. To begin with, he was shortish, rather bow-legged, very deep chested, and with unusually long arms. He had dark hair and small eyes, and the hair grew right down on his forehead, and his whiskers grew right up to his hair, so that there was uncommonly little of his countenance to be seen. Altogether he reminded me forcibly of a gorilla, and yet there was something very pleasing and genial about the man's eye. I remember saying that I should like to know him.

"All right," answered my friend, "nothing easier. I know Vincey; I'll introduce you," and he did, and for some minutes we stood chatting—about the Zulu people, I think, for I had just returned from the Cape at the time. Presently, however, a stoutish lady, whose name I do not remember, came along the pavement, accompanied by a pretty fair-haired girl, and these two Mr. Vincey, who clearly knew them well, at once joined, walking off in their company. I remember being rather amused because of the change in the expression of the elder man, whose name I discovered was Holly, when he saw the ladies advancing. He suddenly stopped short in his talk, cast a reproachful look at his companion, and, with an abrupt nod to myself, turned and marched off alone across the street....