by A. C. (Andrew Cecil) Bradley 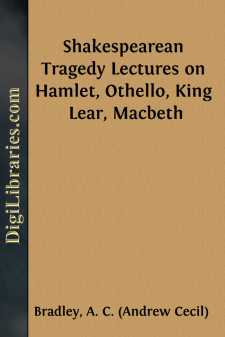 LECTURE I THE SUBSTANCE OF SHAKESPEAREAN TRAGEDY

The question we are to consider in this lecture may be stated in a variety of ways. We may put it thus: What is the substance of a Shakespearean tragedy, taken in abstraction both from its form and from the differences in point of substance between one tragedy and another? Or thus: What is the nature of the tragic aspect of life as represented by Shakespeare? What is the general fact shown now in this tragedy and now in that? And we are putting the same question when we ask: What is Shakespeare's tragic conception, or conception of tragedy?

These expressions, it should be observed, do not imply that Shakespeare himself ever asked or answered such a question; that he set himself to reflect on the tragic aspects of life, that he framed a tragic conception, and still less that, like Aristotle or Corneille, he had a theory of the kind of poetry called tragedy. These things are all possible; how far any one of them is probable we need not discuss; but none of them is presupposed by the question we are going to consider. This question implies only that, as a matter of fact, Shakespeare in writing tragedy did represent a certain aspect of life in a certain way, and that through examination of his writings we ought to be able, to some extent, to describe this aspect and way in terms addressed to the understanding. Such a description, so far as it is true and adequate, may, after these explanations, be called indifferently an account of the substance of Shakespearean tragedy, or an account of Shakespeare's conception of tragedy or view of the tragic fact.

Two further warnings may be required. In the first place, we must remember that the tragic aspect of life is only one aspect. We cannot arrive at Shakespeare's whole dramatic way of looking at the world from his tragedies alone, as we can arrive at Milton's way of regarding things, or at Wordsworth's or at Shelley's, by examining almost any one of their important works. Speaking very broadly, one may say that these poets at their best always look at things in one light; but Hamlet and Henry IV. and Cymbeline reflect things from quite distinct positions, and Shakespeare's whole dramatic view is not to be identified with any one of these reflections. And, in the second place, I may repeat that in these lectures, at any rate for the most part, we are to be content with his dramatic view, and are not to ask whether it corresponded exactly with his opinions or creed outside his poetry—the opinions or creed of the being whom we sometimes oddly call 'Shakespeare the man.' It does not seem likely that outside his poetry he was a very simple-minded Catholic or Protestant or Atheist, as some have maintained; but we cannot be sure, as with those other poets we can, that in his works he expressed his deepest and most cherished convictions on ultimate questions, or even that he had any. And in his dramatic conceptions there is enough to occupy us.

In approaching our subject it will be best, without attempting to shorten the path by referring to famous theories of the drama, to start directly from the facts, and to collect from them gradually an idea of Shakespearean Tragedy. And first, to begin from the outside, such a tragedy brings before us a considerable number of persons (many more than the persons in a Greek play, unless the members of the Chorus are reckoned among them); but it is pre-eminently the story of one person, the 'hero,' or at most of two, the 'hero' and 'heroine.' Moreover, it is only in the love-tragedies, Romeo and Juliet and Antony and Cleopatra, that the heroine is as much the centre of the action as the hero. The rest, including Macbeth, are single stars. So that, having noticed the peculiarity of these two dramas, we may henceforth, for the sake of brevity, ignore it, and may speak of the tragic story as being concerned primarily with one person.

The story, next, leads up to, and includes, the death of the hero. On the one hand (whatever may be true of tragedy elsewhere), no play at the end of which the hero remains alive is, in the full Shakespearean sense, a tragedy; and we no longer class Troilus and Cressida or Cymbeline as such, as did the editors of the Folio. On the other hand, the story depicts also the troubled part of the hero's life which precedes and leads up to his death; and an instantaneous death occurring by 'accident' in the midst of prosperity would not suffice for it....