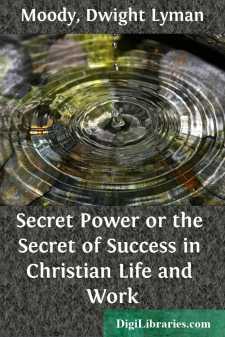 In vain do the inhabitants of London go to their conduits for supply unless the man who has the master-key turns the water on; and in vain do we think to quench our thirst at ordinances, unless God communicates the living water of His Spirit.—Anon.

It was the custom of the Roman emperors, at their triumphal entrance, to cast new coins among the multitudes; so doth Christ, in His triumphal ascension into heaven, throw the greatest gifts for the good of men that were ever given.—T. Goodwin.

To unconverted persons, a great part of the Bible resembles a letter written in cipher. The blessed Spirit’s office is to act as God’s decipherer, by letting His people into the secret of celestial experience, as the key and clew to those sweet mysteries of grace which were before as a garden shut up, or as a fountain sealed, or as a book written in an unknown character.—Toplady.

The greatest, strongest, mightiest plea for the Church of God in the world is the existence of the Spirit of God in its midst, and the works of the Spirit of God are the true evidences of Christianity. They say miracles are withdrawn, but the Holy Spirit is the standing miracle of the Church of God to-day. I will not say a word against societies for Christian evidences, nor against those weighty and learned brethren who have defended the outworks of the Christian Church. They have done good service, and I wish them every blessing, but as to my own soul, I never was settled in my faith in Christ by Paley’s Evidences, nor by all the evidence ever brought from history or elsewhere; the Holy Spirit has taken the burden off my shoulders, and given me peace and liberty. This to me is evidence, and as to the externals which we can quote to others, it was enough for Peter and John that the people saw the lame man healed, and they needed not to speak for themselves.—Spurgeon.

“Without the soul, divinely quickened and inspired, the observances of the grandest ritualism are as worthless as the motions of a galvanized corpse.”—Anon.

I quote this sentence, as it leads me at once to the subject under consideration. What is this quickening and inspiration? What is this power needed? From whence its source? I reply: The Holy Spirit of God. I am a full believer in “The Apostles’ Creed,” and therefore “I believe in the Holy Ghost.”

A writer has pointedly asked: “What are our souls without His grace?—as dead as the branch in which the sap does not circulate. What is the Church without Him?—as parched and barren as the fields without the dew and rain of heaven.”

There has been much inquiry of late on the subject of the Holy Spirit. In this and other lands thousands of persons have been giving attention to the study of this grand theme. I hope it will lead us all to pray for a greater manifestation of His power upon the whole Church of God. How much we have dishonored Him in the past! How ignorant of His grace, and love and presence we have been? True, we have heard of Him and read of Him, but we have had little intelligent knowledge of His attributes, His offices and His relations to us. I fear He has not been to many professed Christians an actual existence, nor is He known to them as a personality of the Godhead....