Roman life in the days of Cicero 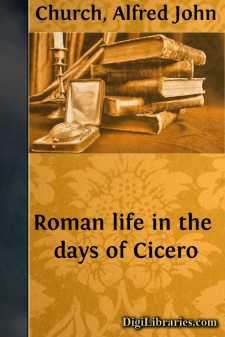 CHAPTER I. A ROMAN BOY.

A Roman father's first duty to his boy, after lifting him up in his arms in token that he was a true son of the house, was to furnish him with a first name out of the scanty list (just seventeen) to which his choice was limited. This naming was done on the eighth day after birth, and was accompanied with some religious ceremonies, and with a feast to which kinsfolk were invited. Thus named he was enrolled in some family or state register. The next care was to protect him from the malignant influence of the evil eye by hanging round his neck a gilded bulla, a round plate of metal. (The bulla was of leather if he was not of gentle birth.) This he wore till he assumed the dress of manhood. Then he laid it aside, possibly to assume it once more, if he attained the crowning honor to which a Roman could aspire, and was drawn in triumph up the slope of the Capitol. He was nursed by his mother, or, in any case, by a free-born woman. It was his mother that had exclusive charge of him for the first seven years of his life, and had much to say to the ordering of his life afterwards. For Roman mothers were not shut up like their sisters in Greece, but played no small part in affairs—witness the histories or legends (for it matters not for this purpose whether they are fact or fiction) of the Sabine wives, of Tullia, who stirred up her husband to seize a throne, or Veturia, who turned her son Coriolanus from his purpose of besieging Rome. At seven began the education which was to make him a citizen and a soldier. Swimming, riding, throwing the javelin developed his strength of body. He learned at the same time to be frugal, temperate in eating and drinking, modest and seemly in behavior, reverent to his elders, obedient to authority at home and abroad, and above all, pious towards the gods. If it was the duty of the father to act as priest in some temple of the State (for the priests were not a class apart from their fellow-citizens), or to conduct the worship in some chapel of the family, the lad would act as camillus or acolyte. When the clients, the dependents of the house, trooped into the hall in the early morning hours to pay their respects to their patron, or to ask his advice and assistance in their affairs, the lad would stand by his father's chair and make acquaintance with his humble friends. When the hall was thrown open, and high festival was held, he would be present and hear the talk on public affairs or on past times. He would listen to and sometimes take part in the songs which celebrated great heroes. When the body of some famous soldier or statesman was carried outside the walls to be buried or burned, he would be taken to hear the oration pronounced over the bier.

At one time it was the custom, if we may believe a quaint story which one of the Roman writers tells us, for the senators to introduce their young sons to the sittings of their assembly, very much in the same way as the boys of Westminster School are admitted to hear the debates in the Houses of Parliament....