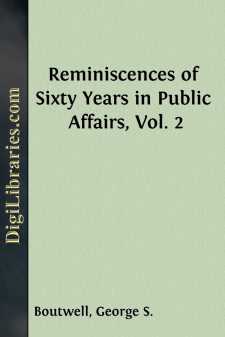 My election to Congress in 1862 was contested by Judge Benjamin F. Thomas, who was then a Republican member from the Norfolk district. The re-districting of the State brought Thomas and Train into the same district. I was nominated by the Republican Convention, and Thomas then became the candidate of the "People's Party," and at the election he was supported by the Democrats. His course in the Thirty-seventh Congress on the various projects for compromise had alienated many Republicans, and it had brought to him the support of many Democrats. My active radicalism had alienated the conservative Republicans. As a consequence, my majority reached only about 1,400 while in the subsequent elections, 1864-'66-'68 the majorities ranged from five to seven thousand.

Among the new members who were elected to the Thirty-eighth Congress and who attained distinction subsequently, were Garfield, Blaine and Allison. Wilson, of Iowa, had been in the Thirty-seventh Congress and Henry Winter Davis had been a member at an earlier period. Mr. Conkling was a member of the Thirty-seventh Congress, but he was defeated by his townsman Francis Kernan under the influence of the reactionary wave which moved over the North in 1862. At that time Mr. Lincoln had lost ground with the people. The war had not been prosecuted successfully, the expenses were enormous, taxes were heavy, multitudes of families were in grief, and the prospects of peace through victory were very dim. The Democrats in the House became confident and aggressive.

Alexander Long, of Ohio, made a speech so tainted with sympathy for the rebels that Speaker Colfax came down from the chair and moved a resolution of censure. Harris, of Maryland, in the debate upon the resolution, made a speech much more offensive than that of Long. As a consequence, the censure was applied to both gentlemen and as a further consequence, the friends of the South became more guarded in expressions of sympathy. It is true also, that there were many Democrats who did not sympathize with Harris, Long, and Pendleton. Voorhees of Indiana was also an active sympathizer with the South. I recollect that in the Thirty-eighth or Thirty-ninth Congress he made a violent attack upon Mr. Lincoln, and the Republican Party. The House was in committee, and I was in the chair. Consequently I listened attentively to the speech. It was carefully prepared and modeled apparently upon Junius and Burke—a model which time has destroyed.

Of the members of the House during the war period, Henry Winter Davis was the most accomplished speaker. Mr. Davis' head was a study. In front it was not only intellectual, it was classical—a model for an artist. The back of his head was that of a prize fighter, and he combined the scholar and gentleman with the pugilist. His courage was constitutional and he was ready to make good his position whether by argument or by blows. His speeches in the delivery were very attractive. His best speech, as I recall his efforts, was a speech in defense of Admiral Dupont. That speech involved an attack upon the Navy Department. Alexander H. Rice, of Massachusetts, was the chairman of the Naval Committee. He appeared for the Navy Department in an able defence. Mr. Rice's abilities were not of the highest order, but his style was polished, and he was thoroughly equipped for the defence. He had the Navy Department behind him, and a department usually has a plausible reason or excuse for anything that it does.

An estimate of Mr. Davis' style as a writer and his quality as an orator may be gained from a speech entitled:—"Reasons for Refusing to Part Company with the South," which he delivered in February, 1861, and in which he set forth the condition of the country as it then appeared to him....