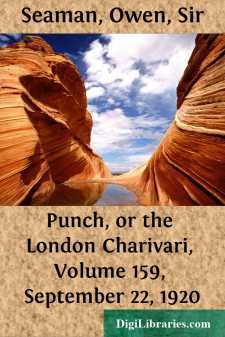 THE MINISTRY OF ANCESTRY.

"As you are aware," said a prominent official of the Ministry of Ancestry, "although our department has only been in existence for a few months the profits have enabled the Government to take twopence off the income-tax and to provide employment for thousands of deserving clerks dismissed, in deference to public opinion, from other Government offices."

"Yes. Could you tell me how this brilliant scheme came into being?"

"The Chinese knew and practised it for centuries. Here the credit for its re-discovery must be assigned to Sir Cuthbert Shover, who, owing to handsome contributions to necessary funds, combined, of course, with meritorious public service during the War, was offered a baronetcy. He refused it for himself, but accepted it for his aged father, thereby becoming second baronet in three months. He deplored the fact that his grandfather was no longer eligible for the honour. Then we saw light. Why should the mere accident of death prevent us from honouring a man if his family were prepared to contribute towards the country's exchequer? But these letters will give you a clearer insight into the working of the department."

The first letter was addressed to Miss Cannon, at Maidstone:—

"Dear Madam,—We have no hesitation in advising you to have a bishop in your family. Few purchases give greater satisfaction. If, as you say, your late maternal grandfather was curate of Slowden, and was, as far as you are aware, a man of exemplary character, we could make him a bishop without delay. Your home being in Kent, it occurs to us that the see of Carlisle would suit the Right Reverend Prelate best. The cost of the proceedings, including a pre-dated Congé d'Élire, would be eight hundred guineas. An archbishopric would be slightly more expensive and, in our opinion, less suitable."

"But so simple. Here is a letter from a man who wants to have had forbears in the Navy. We say:—

"'Naturally it would have been an advantage for your son, whom you destine for the Navy, to have had relations in that service. But it is not too late to remedy this defect.

"'By virtue of the powers conferred upon us by Act of Parliament (Ancestry Act, 1922), we are prepared to give your sometime great-great-uncle William, who, according to family tradition, always wanted to go to sea, a commission in the Navy, and the rank of lieutenant, together with appointment to any ship of the line—with the exception of the Victory—which fought under Lord Nelson. The making out the commission will be put in hand on the receipt of your cheque for three hundred guineas.'"

"Do you always give satisfaction?"

"Occasionally we have to disappoint people. For instance, this letter to a lady at Plymouth:—

"'We fear we cannot grant your request to reserve a berth on the Mayflower for your delightful ancestress, Mrs. Patience Loveday. The Mayflower is already overcrowded, and, owing to some ill-feeling raised in America, we decided to resign all interest in the vessel. Should you desire some other form of Puritan distinction how would you like to provide yourself with a non-juring clergyman as an ancestor?...